The promotion of cultural development is part of the 12 fundamental principles in the Constitution of the Italian Republic. In 1985, to support the arts and cultural industry, the Italian government established a fund for the performing arts called “Fondo Unico per lo Spettacolo” (FUS). In 2021, the Italian Ministry of Culture, otherwise known as Ministero della Cultura (MiC), allocated a budget of 2.9 billion euros to finance culture, heritage, and tourism. Looking at the funds dedicated to performing arts, it was estimated that the MiC will assign the highest figure to opera foundations, followed by the live music sector, and theater. These grants did not include additional funding allocated to the arts and cultural industries during the coronavirus (COVID-19) pandemic. For this, the Italian government implemented a series of financial measures in 2020, including an emergency fund of 245 million euros for performing arts, cinema, and the audiovisual sector.

Cultural and creative industries in Italy

The cultural and creative production system is divided into seven sectors: architecture and design, communication, musical and audiovisual, books, printed media & publishing, video games and software, museums and similar cultural institutions, and performing arts. In 2020, the value added of the video games and software sector reached around 13.6 billion euros, denoting a rise over 2019. In contrast, the value added of museums, libraries, and similar cultural institutions declined by roughly 500 million.

In 2020, museums, theatres, and similar cultural institutions in Italy, as well as stadiums and sporting venues, had to close to the public for several months as the country implemented emergency restrictions to limit the spread of the virus. As a result of the closures, that year the number of admissions in the entertainment industry in Italy went down by nearly 72 percent when compared to 2019. With the decrease in admissions came a dramatic drop in audience expenditure on entertainment events, which accounted for 1.8 billion euros in 2020, a 76 percent decline over the peak of nearly five billion euros in 2019. Concerts and sporting activities reported some of the most dramatic drops in expenditure in the entertainment sectors during the pandemic.
This text provides general information. Statista assumes no liability for the information given being complete or correct. Due to varying update cycles, statistics can display more up-to-date data than referenced in the text.
Published by Statista Research Department, Oct 1, 2021

Value added of cultural and creative industries in Italy 2019-2021

Employment in the cultural and creative industries in Italy
1.45m

Employment in the cultural and creative industries in Italy 2019-2021

Key information on the entertainment industry in Italy 2019-2020

Total government budget for culture and tourism in Italy 2008-2021

Key information on the entertainment industry in Italy 2019-2020

Value added of cultural and creative industries in Italy 2019-2021 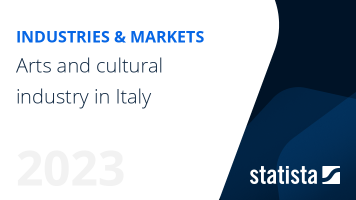 The most important key figures provide you with a compact summary of the topic of "Arts and cultural industry in Italy" and take you straight to the corresponding statistics.