Mobile advertising
Smartphones are an inextricable part of daily life in Italy, with 69 percent of the population owning one in 2020 - a share that is expected to grow to 77 percent by 2025. At around 1.56 billion U.S. dollars, mobile advertising in Italy makes up 46 percent of digital ad spending and is expected to surpass desktop devices in 2023. It is projected to almost double its current value to over three billion by 2025. Among mobile ad formats, marketers spend the most on display ads (video and non-video), accounting for almost three-quarters of mobile ad spend.

Consumer attitudes
In a survey about attitudes towards online advertising carried out in 2022, almost half of the respondents said they were often annoyed by ads on the internet. When asked about how they discovered new brands four out of 10 surveyed shoppers listed search engines as their primary source, followed by television ads. Ads on websites and social media were cited by slightly under a quarter of consumers. Among Gen Z consumers, Amazon reviews and word of mouth recommendations stood out as the sources that impacted purchasing decisions the most. Influencers were the digital source that most impacted Gen Z consumers in their buying decisions.
This text provides general information. Statista assumes no liability for the information given being complete or correct. Due to varying update cycles, statistics can display more up-to-date data than referenced in the text.
Published by Statista Research Department, Nov 17, 2022 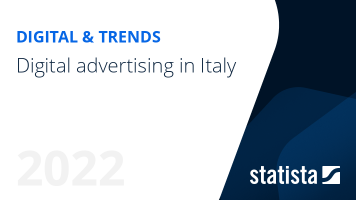 The most important key figures provide you with a compact summary of the topic of "Digital advertising in Italy " and take you straight to the corresponding statistics.