Published by Statista Research Department, Jun 21, 2022
Although society has become more accepting of different gender identities and sexual orientations, members of lesbian, gay, bisexual, transgender, queer, and questioning (LGBTQ) communities face ongoing stigma, discrimination, and barriers. Increased internal and external stressors contribute to the social and health disparities present in this subpopulation. The experience of minority stress can have a number of negative consequences on health and functioning for LGBTQ members of all ages, including increased risk for poor physical and mental health outcomes and dangerous health behaviors. For example, the risk of suicide is alarmingly high among young gay, lesbian, and bisexual adults and surveys show that over half of transgender and non-binary youth in the U.S. have considered suicide within the past year.

Due to ongoing discrimination and a lack of acceptance from some corners of society, the LQBTQ community is often at a higher risk for mental health problems than other demographics. In 2019, around 33 percent of LGB adults in the United States aged 18 to 25 years reported that they had a major depressive episode in the past year. Furthermore, around 12 percent of LGB adults in this age group also reported suffering from alcohol use disorder. The combination of mental health issues and substance abuse greatly increases the risk of suicide and treatment is recommended for anyone suffering from such issues. In the United States, around 22 percent of mental health facilities offer treatment programs specifically for LGBT clients, however a large share of LGB adults suffering from substance use disorder or mental illness do not recieve treatment.

LGBTQ youth are at especially high risk of adverse health and social outcomes and are often faced with discrimination contributing to internal and external pressures concerning their sexual orientation and gender identity and expression. For example, a survey from 2020 found that LGBTQ youth from LGBTQ-affirming homes and schools were less likely to attempt suicide than those who were from homes or attended schools that were not LGBTQ affirming. Similarly, the same survey found that the risk of suicide among transgender and nonbinary youth was lower when such youth reported that the people around them respected their pronouns. Sadly, a large share of LGBTQ youth who want mental health care are unable to recieve it, with cost being the number one reason they are unable to get the care they want. As LGBTQ youth face a high burden of negative health outcomes, cultivating protective factors and fostering resilience is key among this age group; therefore, school and post-secondary institutions have a vital role to play in public health and social interventions.

In the following 6 chapters, you will quickly find the 40 most important statistics relating to "LGBTQ health in the U.S.".

The most important key figures provide you with a compact summary of the topic of "LGBTQ health in the U.S." and take you straight to the corresponding statistics.

LGBTQ media in the U.S.

Homosexuality in the United States

Women's health in the U.S.

Men's health in the U.S. 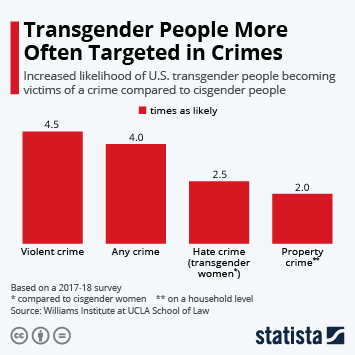