Published by
Simona Varrella,
Jun 21, 2022
LGBT stands for lesbian, gay, bisexual, and transgender. Introduced in the 1990s, this initialism is generally used to include anyone who is not heterosexual or cisgender. Heterosexual refers to a person attracted to people of the opposite gender, whereas cisgender describes a person whose gender identity is the same as their sex at birth. Some other variants have been introduced since then in order to try to include the whole spectrum of sexuality and gender. Among these variants, there are LGBT+ and LGBTQ+. The latter stands for lesbian, gay, bisexual, transsexual/transgender, and queer. According to a survey conducted in 27 countries, seven in 10 people identify as heterosexual. Around three percent of respondents declared to be homosexual, gay, or lesbian, while four percent identify as bisexual. Additionally, one percent are pansexual or omnisexual. Pansexuality describes people who feel attracted to other people regardless of their biological sex, gender, or gender identity, whereas omnisexuality refers to attraction to all gender identities and sexual orientations.

Where pride is hidden

While in many countries sexual orientations other than heterosexual are acknowledged, accepted, and respected, in some other countries this is still an issue. In 71 countries worldwide, being homosexual is, in fact, more than just an issue, it is considered to be a crime. Most of these countries are located in the Middle East, Africa, and Asia. In 11 countries, the death penalty is imposed, or is at least a possibility, for same-sex sexual activity. However, criminalization is not the only reason why many LGBTQ+ people cannot express their sexual orientation. The LGBTQ+ community is often the target of hate crimes and discrimination. A survey conducted in Europe shows that in Eastern Europe and the Balkans, roughly seven in 10 people who identify as lesbian, gay, bisexual, trans, or intersex are never or almost never open about their sexual orientation.

Acceptance of homosexuality is on the rise

Acceptance of homosexuality is higher in Western European countries, Canada, and Australia. Among these countries, over 80 percent of respondents taking part in a recent survey believed that homosexuality should be accepted by society. Data shows that generally acceptance is higher among people who support left-wing ideologies, are more educated, and who are not very religious.

Over the last years, there has been a positive change in the acceptance of homosexuality in the world. Among 27 countries surveyed, South Africa and India recorded the highest increases in the acceptance of homosexuality in society. South Africa is not the only African country making significant progress in this matter: Tunisia, Nigeria, and Kenya recorded an increase as well. Nevertheless, this does not mean that people feel free to express their sexual orientation openly, as exclusion and violence towards LGBTQ+ people persists in these countries. In fact, despite a slight growth in acceptance, Nigeria remains one of the most dangerous countries for LGBTQ+ people in the world.

Coming out is still an act of courage

Even if coming out is more widely accepted in some countries or regions than in others, talking about sexual orientation with family and friends can be a big challenge everywhere. Moreover, giving attention to coming out as not heterosexual or cisgender is still important, because it can give encouragement to other people to openly speak about their sexual orientation. According to a survey conducted in eight countries, in Spain people are more likely to support a family member or friend who would come out as gay, lesbian, bisexual, transgender, or non-binary. However, the results of this survey indicate that support is lower overall for coming out as transgender or non-binary. Another study conducted in Singapore shows that about half of respondents said they would be likely to react negatively to a close family member coming out. Similarly, in Japan most LGBTQ+ people said they have not disclosed their sexual orientation. The way to normalize sexual orientations other than heterosexual is still long, and until that point, coming out will still be an act of courage.

In the following 5 chapters, you will quickly find the 31 most important statistics relating to "LGBTQ+ worldwide".

The most important key figures provide you with a compact summary of the topic of "LGBTQ+ worldwide" and take you straight to the corresponding statistics.

Acceptance in Africa and Middle East

Coming out in Asia and Oceania

Homosexuality in the United States 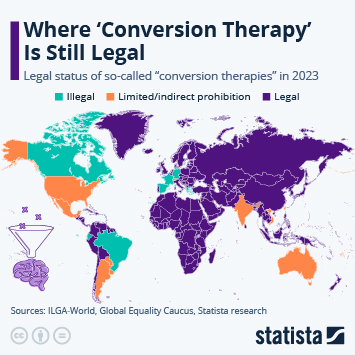 map of where conversion therapy is banned 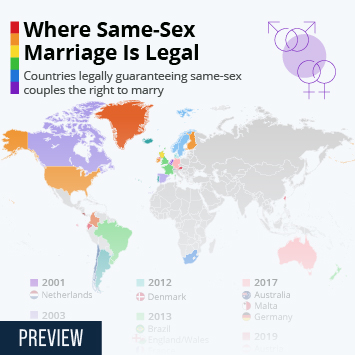