Sports shoes, with modern use largely exceeding their original purpose, represent a very lucrative market in France. Although the first sneakers, created in 1868 thanks to the technique of rubber vulcanization, were originally designed for sports, and in particular basketball, they have now become multipurpose shoes that people wear in the city, in the country and even on catwalks.
In 2019, 324,000 pairs of athletic shoes were produced in France. This category accounted for almost one fifth of the French budget spent on sports-related goods: household spending on sports shoes accounted for nearly 2.5 billion euros in 2019. Another important spending item was sportswear. French people who regularly practice sports spent an average of 120 euros per year for women and 150 euros for men on sportswear. Moreover, the youngest were the ones who spent the most on this type of clothing. In addition, French people practicing sports were not the only ones to buy sportswear: people not doing sports spent almost 90 euros per year on sportswear in 2019.

This figure clearly shows the growing importance of the sportswear trend among the French. While this type of clothing was originally dedicated to sports, sportswear is now at the center of people's clothing practices. According to a study conducted in 2018, more than half of people used sportswear in their daily lives. The porosity between the primary use reserved for sport and the wearing in daily life is indeed important. For example, more than 60 percent of French people wore sweatshirts in their daily lives, and more than half wore T-shirts, down jackets and sweatpants.

Regarding purchasing channels, most French people favored multi-sport stores, whether they were buying items dedicated to sports or sportswear for everyday life. For the latter type of item, it appears that general fashion stores, such as Zara or H&M, were competing with stores dedicated to sporting goods. A good number of them - if not the majority - now offer sportswear collections.
This text provides general information. Statista assumes no liability for the information given being complete or correct. Due to varying update cycles, statistics can display more up-to-date data than referenced in the text.
C. Simionato
Research expert covering DIY, home improvement and furniture retail
Get in touch with us now
Published by C. Simionato, Jan 11, 2022

Market share of sports and sportswear retailers in France 2020

Import value of fashion sportswear to France 2019, by product

Leading sport clothing brands in France 2020, by number of users 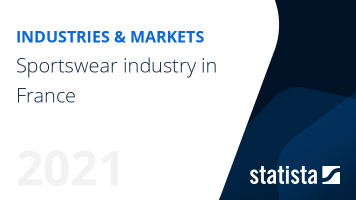 The most important key figures provide you with a compact summary of the topic of "Sportswear industry in France" and take you straight to the corresponding statistics.

Sport practices among the French

Sporting goods in the United States
Apparel market in Europe
Textile & Other Footwear Report 2022
The State of Fashion 2020
Coronavirus: impact on apparel and textiles in Europe
Manufacturing: Fashion in Europe - Industry Insights and Data Analysis
Sportswear industry in France