Published by
P. Smith,
Sep 14, 2022
Sweden is well-known for its fashion and design exports, in large part thanks to H&M and IKEA. The H&M Group is one of the leading fashion companies worldwide. It comprises the fashion brands H&M, COS, Weekday, Cheap Monday, & Other Stories, and Monki. Additionally, it operates the H&M Home brand. The company's headquarters are located in Stockholm, Sweden.
H&M stands for Hennes & Mauritz, but it took several years until the final name evolved. The company was founded by Erling Pedersson, who opened his first fashion retail store in 1947 in Västerås, Sweden. At that time, it was called Hennes, which is the Swedish word for "hers". As the name suggests, this retail format specialized in women’s fashion. After acquiring the hunting apparel and equipment retailer Mauritz Wildforss, the company name was changed to Hennes & Mauritz and men’s fashion was included in the product range.

In 2021, the group’s total sales amounted to around 22.04 billion U.S. dollars. Europe is the biggest market for H&M: in 2021 the external net sales in Europe and Africa was over three times the value of those in North and South America. H&M’s sales earned the company fifth place in a ranking of the leading apparel retailers worldwide. H&M’s fast fashion competitor Inditex, owner of the brand Zara, came in third. Zara’s brand value was also significantly higher than H&M’s. In 2022, H&M had a brand value of over seven billion U.S. dollars.

The number of H&M stores has fallen since the coronavirus pandemic: there were around 4,800 stores worldwide in 2021, which was roughly 200 fewer stores than in the previous year. The three countries with the highest number of stores are the United States, China, and Germany. Under the umbrella of the H&M Group, the company hosts a number of other apparel and homeware brands, such as COS, & Other Stories, and Arket. The brand with the most physical stores is H&M. It is present in 75 markets, while its online business is established in more than 50 countries.

In the following 5 chapters, you will quickly find the 25 most important statistics relating to "H&M Group".

The most important key figures provide you with a compact summary of the topic of "H&M Group" and take you straight to the corresponding statistics.

Textile and clothing retail in Germany 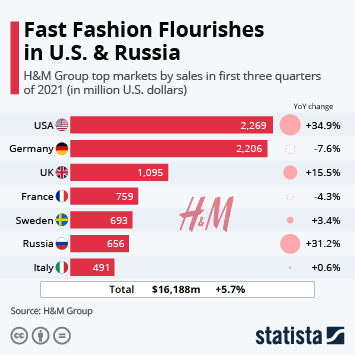