Published by Statista Research Department, Aug 2, 2022
Waste is any residue originating from the collection, transportation, processing, disposal, and recycling of materials (domestic and/or industrial) that are intended for throwing away. In order to reduce environmental impact and protect humans from dangerous substances, waste management is becoming a pivotal and lucrative task for governments across the world. For comparison, in Europe an average of 500 kilograms of waste is produced by each person. Notwithstanding, France ranked ninth among European countries, with 546 kilograms of waste produced per citizen.

Veolia and waste management in France

Veolia and Suez, French multinationals, are two of the biggest waste management companies in the world, employing thousands of people and with tens of billions of dollars in revenue every year. Veolia itself, which operates as a multifarious company, generated roughly 9.6 billion euros in revenue from its waste division in 2019. The following year, the national revenue of the company reached almost 5.5 billion euros. In addition to services from waste collection for business and residential sectors, to recycling and waste processing, 24 percent of revenues are generated from the treatment of hazardous and liquid waste. According to a study of the French Ministry of Ecological Transition, 27 percent of pollutants identified in groundwater derive from petroleum substances. The French population, moreover, is worried about water pollution, as a recent survey shows.

Approximately 17.1 million metric tons of waste were collected via waste disposal in France in 2020. In 2016, companies allocated about nine billion euros to waste management. Moreover, private citizens are actively involved in waste sorting. In fact more than 50 percent of the population admitted to sorting their garbage, though only 39 percent of the French are aware of the economic benefits of recycling.

Across Europe, Germany represents the country with the highest recycling rate, immediately followed by Slovenia and Austria. Countries like France, on the other hand, are lagging behind compared to the other EU-28, with a recycling rate of 46 percent. The low rate might be explained by packaging conditions or lack of information regarding waste separation.

In the following 6 chapters, you will quickly find the 42 most important statistics relating to "Waste in France".

Statistics on the topic
Waste production per capita
535 kg
Number of landfills in France 2019
4,591
Veolia revenue in France
5.87bn EUR 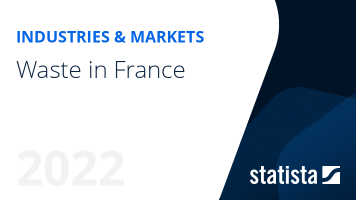 The most important key figures provide you with a compact summary of the topic of "Waste in France" and take you straight to the corresponding statistics.

Second-hand apparel and textiles in France

Environmental impact of the internet in France