Published by Statista Research Department, Jan 17, 2022
If the first nuclear reactor became operational in 1955, French electronuclear development sped up in the early 1980’s. Indeed, fifteen reactors were implemented in the electric grid between 1980 and 1981. As of June 2020, France owned the second largest nuclear park in the world.
The total number of reactors peaked between 2000 and 2005, with fifty-nine nuclear reactors generating electricity across France. France’s gross nuclear electricity production dropped below 340,000 gigawatts-hour (GWh) in 2020, the consequence of a slow decline over the past fifteen years. In 2006, more than 450,000 GWh of gross nuclear energy were produced in France, marking the end of the peak in the number of reactors. Despite the fall in nuclear electricity production, nuclear power still accounted for almost 71 percent of French energy production in 2019.

Starting its civilian and military program after World War II, France has a long history of uranium production. In 2018, French leader Orano (formerly called Areva) owned 11 percent of the uranium production market, making it the second leading company in the world in this field. In 2019, Orano's mining production amounted to a bit more than 8,000 metric tons of uranium. Overall, France’s nuclear fuel fabrication capacities are expected to exceed 1.6 thousand tons of heavy metal by 2025.

Electricity production and distribution is assumed by Electricité de France (EDF), the first electricity producer and provider in Europe. While having an international presence, most of its revenue is generated in France, a bit more than 28 billion euros in 2020. In the same year, the group’s installed nuclear electric capacity in France amounted to 61,370 megawatts, while nuclear power represented 87 percent of EDF’s electricity production.

Nuclear energy has been the center of many debates, one of which was related to nuclear waste. In 2019, EDF transported more than a thousand tons of spent nuclear fuel across France. This number has actually been decreasing since 2015. It comes as no surprise that close to 60 percent of radioactive waste was generated by the nuclear industry, civilian and military combined.

Another controversy concerns nuclear incidents, especially since Fukushima. The number of significant events registered in France rose between 2010 and 2020, from 1,107 events to almost 1,377. More than half of the French population identified non-recyclable waste and the risk of accidents as the most convincing arguments against nuclear power.

In the following 6 chapters, you will quickly find the 29 most important statistics relating to "Nuclear power in France".

The most important key figures provide you with a compact summary of the topic of "Nuclear power in France" and take you straight to the corresponding statistics.

Opinions on nuclear power among the French population

Nuclear power in the UK 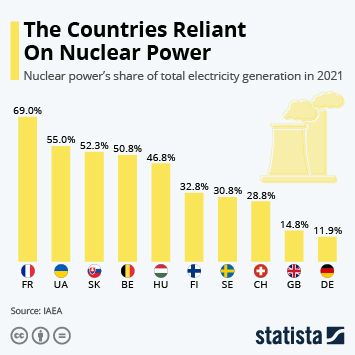