Credit and debit card market in India - statistics and facts

Published by Statista Research Department, Jul 25, 2022
A well-functioning credit and debt system forms the core of a capitalist economic system. It is necessary to have enough liquid funds for investments or production itself, in order to produce economic output and generate profits. This depends on several conditions: an independent reserve bank that ensures the stability of the economic system in general and the liquidity of banks and the state in particular, banks or financial institutions to lend out money, clear regulations on interest, innovative companies, and affluent customers.
The credit cycle applies for both companies and individuals and it is not a new phenomenon: Indian villages traditionally had a sahukar who would give loans or tangibles at very high interest rates, sometimes taking land or labor as a guaranty. Today, loans can be taken for household appliances, education, or housing, depending on the need for investment and the income group. Along with the spread of online marketplaces, digital payments grew exponentially. This diversified the accessibility of a tool created at the end of the 19th century originally meant only for the rich.

Credit cards first appeared in hotels in the United States, where they were given to wealthy, regular guests. In the years that followed, they spread to other industries and target groups. Regulations in late 1960s led to the formation of the financial service corporations Mastercard Inc. and Visa Inc., which dominated the global market. In recent years, the Chinese corporation Union Pay caught on as well. Standard credit cards allow the holder to purchase items or withdraw cash at an authorized point by borrowing money from the issuing bank or financial institution. Standard debit cards have the same features but draw funds from a deposit. Thereby, debit cards do not carry the same risk of indebtedness with banks as credit cards.

The credit and debit card market in India emerged in the wake of the market liberalization of the 1990s, when more and more private banks were founded, and public banks adjusted to global standards. With an emerging middle class, the number of credit and debit cards gathered pace as well. It was forecast that the number of credit cards would reach around 44 million by 2025, and the number of debit cards around 970 million. India was by far the country with the most debit cards in use worldwide. This development can be partially attributed to the Pradhan Mantri Jan-Dhan Yojana scheme, which provided around 300 million RuPay debit cards. RuPay was initiated in 2012 as the domestic alternative to Mastercard, Visa, and Union Pay. By 2020 it had gained a market share of around 60 percent in terms of numbers of credit and debit cards. Nevertheless, the purchasing power of its holders was limited.

The advantages of “buy now, pay later” convinced many Indians within the growing middle class. However, credit cards may include a debt-trap, particularly in times of economic crisis like the coronavirus (COVID-19) pandemic. If a due date to repay the credit cannot be reached, the interest rate goes up rapidly. On the other hand, loans which cannot be returned and are known as non-performing assets, posed a huge challenge for Indian banks in recent years.

In the following 6 chapters, you will quickly find the 29 most important statistics relating to "Credit and debit card market in India". 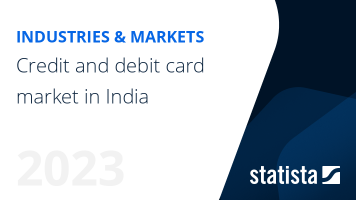 The most important key figures provide you with a compact summary of the topic of "Credit and debit card market in India" and take you straight to the corresponding statistics.