Credit card penetration varies significantly across the world, as consumers in some countries nearly all use a Visa or Mastercard issued credit card whilst these cards are barely used in other countries. According to survey data from the World Bank – which stems from 2017, as this was the last time this three-year survey was held – Canada, Israel and Norway were the only three countries worldwide where credit card ownership among consumers was over 70 percent. To compare, countries such as Bangladesh and Morocco both had a credit card penetration of 0.2 percent in 2017. Whether this situation changed somewhat in 2020 or 2021 is not clear, as newer data has not released yet. Statista estimates that credit card ownership across the world in 2020 is still highest in Canada, although Japan now makes an entry in the top three. Noticeable are the high positions for several countries in Europe – Luxembourg, Finland, Norway – which tend to do their online purchases outside of their national borders.

Credit cards in India: a land of opportunity?

Noticeable in both overviews of credit card penetration is India, with ownership in the country believed to be around three percent – a percentage far lower than many other big countries in the world. Statista estimates that India’s penetration rate for this payment method will increase in the years after 2020, although by only a few percentage points. This is different from earlier years, when the market size of credit cards in India was expected to grow by over 20 percent between 2019 and 2020. Since 2020, however, Indian banks started to demand higher credit scores of potential credit card customers. The number of credit cards issued by HFDFC – one of the country’s biggest banks – grew by about 15 to 20 percent year-on-year 2019, only to increase by about three percent in 2020.

COVID-19 and the effects on credit card debt

The financial hardship of the coronavirus pandemic led several credit card companies to temporarily relieve borrowers. U.S. credit card balances in early 2021 were around 160 billion U.S. dollars lower than they had been in late 2019, as borrowers were both trying to pay off their debts and purchasing products in physical stores was hampered by lockdown measures. The same development occurred in the United Kingdom: Outstanding balances on credit card accounts in the UK declined by nearly 25 percent year-on-year in February 2021. In contrast to this development is the rise of buy now, pay later or BNPL, which might not always impact credit scores. As of 2020, market share of BNPL in overall e-commerce payments across multiple countries worldwide was relatively highest in northwestern Europe.
This text provides general information. Statista assumes no liability for the information given being complete or correct. Due to varying update cycles, statistics can display more up-to-date data than referenced in the text.

Country with highest credit card penetration in the world
Canada

Use of online payment methods in Europe 2019 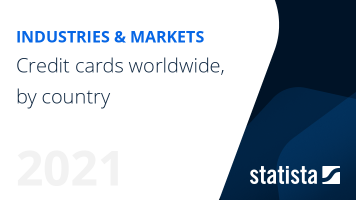 The most important key figures provide you with a compact summary of the topic of "Credit cards worldwide" and take you straight to the corresponding statistics.