Digital payment options like PayPal’s Pay in 4, Klarna, Afterpay, QuadPay and Affirm grew increasingly popular in online shops across the world. One out of three UK consumers used these payments more often than before during lockdown in early 2020. Buy Now, Pay Later (BNPL) apps allow consumers to put down a certain percentage of the overall purchase price, then pay off the rest in installments over a certain period of time. There are significant differences, though, when comparing the BNPL market share in over 20 domestic e-commerce markets worldwide. Indeed, the payment options were popular in northwestern Europe but also in Australia and New Zealand: domestic options Afterpay and Zip registered in millions of active users.

BNPL featured in a October 2022 webinar created and hosted by Statista, called "Economic uncertainty and Buy Now, Pay Later". The slides of this presentation, are available on a separate page.

For which products is BNPL being used?

As Buy Now Pay Later is a relatively new phenomenon even, there is not much data available yet on how people use these payment solutions. Most focus on the user demographics: younger generations in the United Kingdom are more likely to use BNPL than older generation, for instance. This was also true for the United States, although older age groups in the U.S. did use Buy Now Pay Later much more often than they did before. This suggests that apps like Klarna or Afterpay are not exclusively used by Millennials or Gen X, indicating a use for expensive purchases besides fashion. An example of this can be found in Europe: During COVID-19, installment loans in Poland became more popular for specific products, notably electronics – computers or TVs - and household appliances.

Record inflation and significant changes to the prices of everyday items forced consumers to reconsider how they pay for online shopping. BNPL is one of the payment options impacted by this in, for instance, Chile. A survey held in 10 different countries across North America, Europe, and Latin America suggests, however, that debit cards - not Buy Now, Pay Later - sees the highest increase in use. That said, consumers in the United States did indicate in February 2022 that inflation was a reason for them to use BNPL more often. A trend that is observed in some countries is the growing use of buy now, pay later for offline shopping - most notably grocery shopping.
This text provides general information. Statista assumes no liability for the information given being complete or correct. Due to varying update cycles, statistics can display more up-to-date data than referenced in the text.

Key players in buy now, pay later (BNPL) services in the U.S. based on users 2020

Most popular online payment methods in the UK 2021 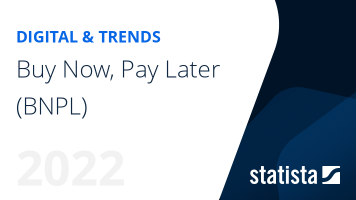 The most important key figures provide you with a compact summary of the topic of "Buy Now, Pay Later (BNPL)" and take you straight to the corresponding statistics.