Published by
Bruna Alves,
Jul 5, 2021
Humankind has harvested wind energy for different purposes throughout history, from the propulsion of sailing ships to the use of windmills to pump water or grind grain. But it was not until the second half of the 20th century that large wind turbines began to be developed to generate electricity. Today, wind power is considered one of the main renewable energy sources, with an installed capacity continually growing worldwide. In Latin America, the industry has followed the same global upward trend, with the installed capacity reaching 34 gigawatts in 2020. Despite the progress made in recent years, the region still accounts for less than five percent of the global wind capacity, with an extensive potential still to be explored.

Brazil and Mexico, the wind leaders of the region

The first commercial-scale wind power plant in Latin America was built in Costa Rica in 1996. More than two decades later, however, the Central American nation has lagged behind, with new leaders rising in the region. In 2020, Brazil had by far the largest installed wind capacity in the region, with more than 17 gigawatts. The Brazilian wind industry is also among the most important worldwide, ranking among the top ten countries.

Nevertheless, the regional runner-up Mexico is making considerable progress. In 2019, the North American nation reported the highest new capacity additions in Latin America. That same year, a record 16.7 terawatt-hours of wind power were generated in the country. Despite skepticism towards clean energy from the current Mexican government, wind capacity is forecast to continue growing for at least another decade.

A wind of change is on its way

The COVID-19 pandemic has presented a major obstacle to the development of new projects in the energy sector in 2020. However, despite new wind and solar power additions dropping sharply in Latin America that year, the landscape looks promising for the region's future. In 2021, additions surpassing 11 gigawatts are expected to be installed. In Chile, Latin America’s fourth-largest wind market, the installed wind power capacity is expected to more than quadruple by the middle of this century.

One of the areas with lots of room for future development is the installation of offshore wind farms, which currently have no presence in the region. According to estimates, Argentina and Brazil display the highest technical potential for offshore wind energy, both with more than one terawatt of feasible capacity. With its vast coastal areas, strong winds, and favorable climatic conditions, Latin America could become a major wind energy powerhouse in the decades to come.

In the following 5 chapters, you will quickly find the 29 most important statistics relating to "Wind power in Latin America". 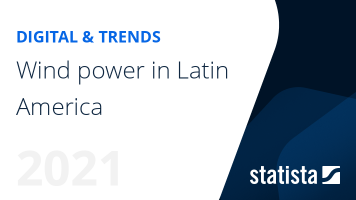 The most important key figures provide you with a compact summary of the topic of "Wind power in Latin America" and take you straight to the corresponding statistics.