Published by
Bruna Alves,
Jul 5, 2021
Amidst the debate on the future developments of climate change and the need to reach net zero emissions within the next couple of decades, the global energy transition from fossil fuels to renewables has recently found itself the center of attention. Renewable sources – which are defined as resources that can be naturally renewed within a human lifetime – include solar, wind, marine, biomass, hydro, and geothermal energy. Due to its vast geography and abundant natural resources, Latin America has the potential of becoming a major player in the sector. In 2020, the renewable energy capacity in the region neared 280 gigawatts, a growth of more than 60 percent in comparison to the beginning of the decade.

A decade of progress in renewable capacity

Renewable resources, in particular hydropower, have historically been at the core of Latin America’s energy matrix. For example, the Itaipu Dam, on the border between Brazil and Paraguay – the world’s second largest hydroelectricity dam, based on capacity – was inaugurated in 1984. Almost fourty years later, Latin America’s hydropower capacity stood at 200 gigawatts, representing nearly three quarters of the region’s renewable capacity in 2020. In line with global trends, however, the past decade saw a focus shift, with solar and wind power in the spotlight. In turn, Latin America’s wind power capacity more than quintupled since 2013. Meanwhile, its solar photovoltaic capacity increased by over 100-fold in the past ten years, recently surpassing 20 gigawatts.

Despite the growth of the past years, most Latin American countries still exhibit a considerable opportunity for development when it comes to renewable energy sources. Renewables still account for less than 20 percent of the primary energy supply in Mexico. In Argentina, they make up an average of 10 percent of the primary energy generation. In addition, countries like Brazil and Paraguay – which hold some of the region’s highest shares of renewables in their domestic energy supply – heavily rely on large hydropower plants. Yet, the promotion of large hydropower as a renewable energy source finds itself under dispute due to the high social and environmental impacts caused by dam construction. As a result, in the age of solar and wind, Latin American countries like Argentina, Chile, and Mexico remain among the most attractive for renewable energy investments.

In the following 5 chapters, you will quickly find the 32 most important statistics relating to "Renewable energy in Latin America".

The most important key figures provide you with a compact summary of the topic of "Renewable energy in Latin America" and take you straight to the corresponding statistics. 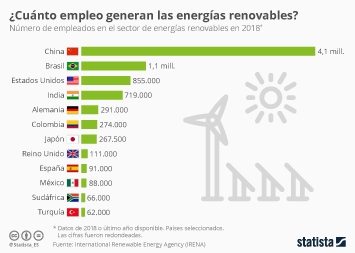