For the past decades, Indonesia’s infrastructure development has been focused on Java Island, its most populous island and the location of its current capital city, Jakarta. The value of its total construction completed is still over forty times more than in Bali and thirty times more than in Papua, despite the growth in other islands. In recent years, the Indonesian government has tried to reduce the development inequality by building toll roads across the nation. In 2015, Indonesia started its biggest infrastructure project, the Trans-Sumatra Toll Road, to connect the northern part to the southern part of Sumatra, the second-largest island in the archipelago and the six-largest island globally.

More than 80 percent of Indonesia’s construction establishments are small companies, and they are heavily reliant on local workers. West Java by far has the largest number of construction workers in Indonesia. Being a permanent construction worker in Indonesia is still a rare case today as most of the workers are casual daily wage workers without certification and high formal education. In the past years, the Indonesian government is supporting these workers to do the formal certification to level up their skills.

In August 2019, Indonesia’s President Joko Widodo officially announced that its capital city will be relocated to East Kalimantan. The infrastructure projects for the relocation were planned to start in 2021. However, in 2020, the Indonesian government had to put many projects, including the capital city relocation, on hold due to the COVID-19 pandemic. In that year, the revenues of Indonesia’s largest construction companies such as Waskita Karya, Wijaya Karya, and PT PP also declined for the first time in the past few years.

Even before the pandemic, most of the small-sized construction companies in Indonesia were already having a hard time sustaining their businesses and competing against the large contractors. Smaller construction companies have limited heavy equipment and capital which the large-scale infrastructure development projects required. However, as long as the Indonesian government is focusing on developing the archipelago’s infrastructure to strengthen its economy, Indonesia’s construction sector is expected to keep growing, supported not just by the government but also by foreign investments and the private sector.
This text provides general information. Statista assumes no liability for the information given being complete or correct. Due to varying update cycles, statistics can display more up-to-date data than referenced in the text.
Published by Statista Research Department, Sep 13, 2022

GDP growth rate for the construction sector in Indonesia
2.81%

GDP growth rate for the construction sector in Indonesia 2012-2021

Most produced material from mining and quarrying in Indonesia
Sand

Production breakdown from mining and quarrying in Indonesia 2019, by type of material 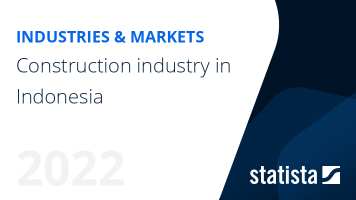 The most important key figures provide you with a compact summary of the topic of "Construction industry in Indonesia" and take you straight to the corresponding statistics.