As the ASEAN's largest country with over 260 million inhabitants, Indonesia accounts for 40 percent of the region's energy consumption. However, Indonesia's per capita electricity consumption is still one of the lowest among other Asian countries and is much less than the global average. As an emerging economy, Indonesia's electricity demand is expected to rise significantly, particularly in the industrial and household sectors.

The electrification rate in Indonesia

The electrification rates in Indonesia vary greatly amongst the country's 34 provinces and over 17,000 islands, particularly between urban and rural areas. Around 20 percent of Indonesia's population, or 50 million people, still lack access to electricity. However, half of these people already live in electrified areas, necessitating just grid densification programs. The cost of installing electricity is estimated to be 290 U.S. dollars per household, which is relatively expensive for many Indonesians. The most recent government scheme for electrification, BPBL, aims to fund 80,000 connections by 2022.

In 2021, the Indonesian Ministry of Energy and Mineral Resources (MEMR) released the 2021–2030 Electricity Supply Business Plan (RUPTL), with the goal of reaching 100 percent electrification by 2022. According to the RUPTL, at least 40.57 GW of power plants is needed to meet Indonesia's projected electricity consumption by 2025. The planned 2030 electricity generation mix consists of 34 percent coal, 15.6 percent natural gas (including LNG), 52 percent renewable energy, and 0.4 percent diesel oil.

Indonesia's electrical generation is heavily dependent on fossil fuels, with coal generating most of the country's electricity. Coal also remains the economic backbone of regions of Indonesia, with about 39 billion metric tons of reserves, and miners are among the country's largest taxpayers. While the Indonesian government is attempting to increase the usage of renewable energy sources, new power plants are still primarily focused on fossil fuels. Compared to coal, Indonesia's growth in renewable electricity generation is substantially lower, suggesting that Indonesia still has a long way on its transition toward a low carbon electricity future.

Perusahaan Listrik Negara (PLN), Indonesia's main electricity provider, also relies significantly on electricity subsidies from the Indonesian government to keep electricity prices low. Rural electrification is often not financially appealing to PLN because Indonesia's off-grid areas are sparsely populated, have a low load factor, and are dominated by low-end household consumers charged a substantially subsidized tariff. Therefore, to improve electrification and living standards in a more environmentally and socially sustainable manner, it is crucial to support decentralized, local energy providers in Indonesia.
This text provides general information. Statista assumes no liability for the information given being complete or correct. Due to varying update cycles, statistics can display more up-to-date data than referenced in the text.
Published by Statista Research Department, Jul 4, 2022

Province with the lowest electrification rate in Indonesia
Papua

Electrification rate in Indonesia 2021, by province

Sector that consumed the most energy in Indonesia
Transportation

Energy consumption in Indonesia 2021, by sector

Electricity consumption per capita in Indonesia 2014-2022 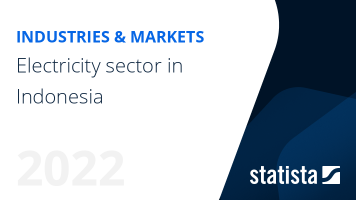 The most important key figures provide you with a compact summary of the topic of "Electricity sector in Indonesia" and take you straight to the corresponding statistics.