Due to their light weight and incredible versatility, plastics have increasingly become a ubiquitous material around the world over the past seven decades. Plastics have important uses in almost all sectors, with plastic packaging as the most familiar and voluminous use of plastics. The global plastics market value was estimated to be almost 580 billion U.S. dollars in 2020, and is forecast surpass 750 billion U.S. dollars by 2028. With annual global plastic production amounting to nearly 370 million metric tons of plastics in the last few years, the industry continues to grow. China is the world's largest plastic producing nation by far. Between 2014 and 2019, China's share of global plastic materials production grew from 26 percent to 31 percent.

As the hub of manufacturing of the world, China has more than doubled its exports of plastic products in the last decade, with an export volume of over 14 million metric tons in 2019. East Asia and Pacific has imported a significant amount of the plastic and rubber products from China in terms of value. North America, as well as Europe and Central Asia followed as the next largest plastic importers from China.

On the other side, imports of plastic and rubber products to China based on value had a sharp surge from 2009 to 2010, and have consistently remained within the same value range, between 75 billion U.S. dollars and 94 billion U.S. dollars, since then. Similar to exports, the main regions exporting plastic goods to China were East Asia and Pacific, followed by MENA, Europe, and Central Asia, respectively.

As the world’s largest plastic producer, China has also become the largest single-use plastic waste generating country in the world, having generated over 25 million metric tons of plastic waste in 2019 alone. This has posed threats to the already burdened waste management system in the country, hence the Chinese government's introduction of higher targets for reusing solid waste in the “Made in China 2025”plan. In addition to reusing domestic solid waste, Chinese authorities imposed a plastic waste import ban in 2017 to reduce the amount of plastic waste imported from foreign countries, as it used to be a popular destination for other countries to manage their plastic waste, ostensibly for recycling. The ban has shown a significant impact on China's plastic waste import volumes, while the exporting countries have scrambled to find a replacement waste management strategy. For instance, the amount of plastic waste imported to China from Japan has dropped from around 749,000 metric tons in 2017 to merely 46 metric tons in 2018, and subsequently sank to only seven metric tons in 2020.
This text provides general information. Statista assumes no liability for the information given being complete or correct. Due to varying update cycles, statistics can display more up-to-date data than referenced in the text.
Published by Ian Tiseo, Oct 12, 2021 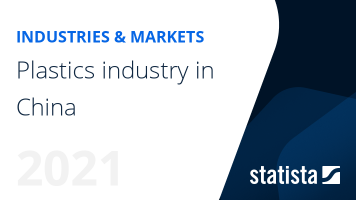 The most important key figures provide you with a compact summary of the topic of "Plastic industry in China" and take you straight to the corresponding statistics.