Published by Ian Tiseo, Nov 11, 2022
The plastic industry was established in India in 1957 when the country began producing polystyrene. India’s plastic industry has grown rapidly since its inception and is now a key player in global plastics production, comprising more than 20,000 processing units. It is a multi-billion dollar industry and a major contributor to India’s economy, employing some four million people. It is also a global supplier, with India’s polymer exports totaling some 1.5 million metric tons in 2021.

How much plastic is consumed in India?

Between 1990 and 2021, plastic consumption in India increased 23-fold to roughly 21 million tons. This rapid increase saw per capita plastic consumption rise from just one kilogram per inhabitant to 15 kilograms. India accounts for approximately six percent of global plastics use, making it the third-largest consumer of this material behind China and the United States. Factors such as economic growth and population growth are expected to drive plastics use in the coming decades, with projections showing plastics consumption in India could rise to more than 160 million metric tons by 2060. This would see the country’s share of global plastic consumption more than double compared to current levels.

Thermoplastic demand in India totaled 19.3 million tons in the financial year 2022. Polypropylene (PP) had the largest share of demand that year at 32 percent or 6.1 million tons. High-density polyethylene (HDPE) and Linear low-density polyethylene (LLDPE) followed, with a combined share of 29 percent.
Polymers are used to produce products across a broad spectrum of other industries that cover almost every domain of life, such as household items, automobiles, packaging, electrical and electronics, among many others. Polyethylene terephthalate (PET), for example, is typically used for rigid packaging purposes. Common packaging products made from PET include water and soft drink bottles. PET is an ideal choice for these packaging applications because it is durable, colorless, lightweight, and cheap to produce, especially compared to glass packaging production. It is also 100 percent recyclable.

Reliance Industries is India’s largest manufacturer of polymers, with the multinational conglomerate accounting for almost 50 percent of the country’s polyolefins production capacity. Reliance Industries has the largest production capacity for various polymers, including polypropylene (PP) and Polyethylene terephthalate (PET). Some of India’s leading plastic PET bottle, jar and container companies include TPL Plastech and Hitech Corporation, the latter of which is a leading manufacturer of rigid plastic packaging and had a market cap of almost four billion Indian Rupees as of November 2022. Other major plastic product manufacturers in India include Supreme Industries and Nikamal.

In the following 5 chapters, you will quickly find the 25 most important statistics relating to "Plastic industry in India". 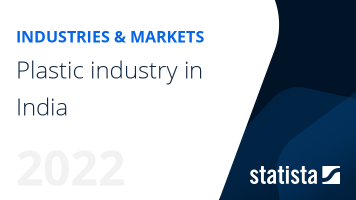 The most important key figures provide you with a compact summary of the topic of "Plastic industry in India" and take you straight to the corresponding statistics.