Published by L. Yoon, Sep 24, 2021
Cryptocurrency fever has swept South Korea. Around ten percent of South Korea’s population invested in cryptocurrencies when Bitcoin prices reached an all-time high in the first half of 2021 – up more than double from 2017, when the crypto boom first hit the country.
South Korea is estimated to be the third biggest cryptocurrency market in the world. While South Korean crypto exchanges accounted for more than nine percent of the global trading volume in August 2021, the Korean Won ranks among the top five most traded currencies for Bitcoin.

Bitcoin and other cryptocurrencies are currently not considered legal tender or financial assets in South Korea, yet the market has grown extensively in the last few years. The daily trading volume of cryptocurrencies in April 2021 increased more than twelvefold compared to the previous year and even surpassed the value of shares traded on the stock exchange.

What is noteworthy is that the industry's growth is largely based on the trading of cryptocurrencies. Domestic Initial Coin Offerings (ICO) are banned in South Korea and the crypto asset management market is relatively small. Due to the lack of profitability, cryptocurrency mining activities are rather limited in this country. A few providers such as Upbit, Bithumb, Coinone, and Korbit dominate the market. Upbit has the largest market share of around 80 percent with its eight million registered users.

After the crypto craze in 2017, the South Korean government began regulating the overheated market. Aside from various new regulations such as the planned crypto taxation, legislation came into effect that required virtual asset service providers to register with the Financial Intelligence Unit (KFIU), the Financial Services Commission's anti-money laundering body, by September 24, 2021. The registration requirements included proof that providers were using real-name bank accounts. However, this was met with reluctance from many banks that feared the potential risks involved. Ultimately, many small providers who, among other things, were unable to secure banking partnerships had to shut down or reduce their services.

How can this crypto fever in South Korea be explained? One factor seems particularly interesting when considering the age of investors. More than 60 percent of newly registered users of the four major South Korean crypto exchanges were in their twenties and thirties. Skyrocketing housing prices and youth unemployment, hovering around nine percent, are often seen as reasons for young people's growing frustration. They believe, or at least hope, that they can hit the “crypto jackpot”.

In the following 8 chapters, you will quickly find the 41 most important statistics relating to "Cryptocurrency in South Korea". 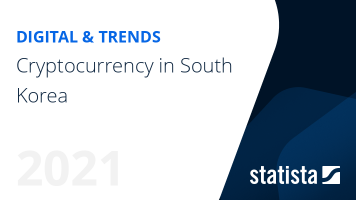 The most important key figures provide you with a compact summary of the topic of "Cryptocurrency in South Korea" and take you straight to the corresponding statistics.