Published by L. Yoon, Jan 21, 2022
The COVID-19 pandemic has driven a significant shift to digital banking worldwide. People are increasingly using online and mobile channels instead of visiting bank branches. For banks, this is both a challenge and an opportunity. With new innovative products and services, they are trying not only to follow the trends but also to set them.
Against this backdrop, South Korea, with its fastest internet speed and highest online banking penetration in Asia, seems to be one of the most interesting countries where rapid digitalization and dynamic development in the banking sector is occurring – particularly in terms of very demanding customers and banks trying to meet their high expectations.

The rise of mobile banking in South Korea

The number of mobile banking customers in South Korea and corresponding transaction volume peaked in 2021. An increasing number of people across all age groups, both young and old, are actively using mobile internet to conduct financial transactions such as transferring money, paying bills, and checking deposits with just a few taps. While COVID-19 may very well have encouraged this development, the changing trend toward mobile banking in South Korea was evident even before the pandemic.

Behind this development was the strong demand for more convenient banking from South Korean customers – known to be early adopters of new technologies. Having been gradually forced to close their branches in recent years, banks have had to make corresponding efforts to retain their customers by expanding their services in innovative ways.

The launch of digital banks

The launch of digital banks (K Bank and Kakao Bank in 2017 and Toss Bank in 2021) marked an important step toward digital banking in South Korea. These banks, also known as internet-only banks or neobanks, have no physical branches and operate only through digital channels.

The success of Kakao Bank is particularly noteworthy here. With its intuitive, easy-to-use banking app and convenient services such as opening a bank account within minutes, Kakao Bank has now become one of the leading digital banks in Asia. As a positive side effect, the rise of digital banks has also led to traditional banks launching better and more customer-friendly apps.

In a short time, South Korea has experienced rapid digital transformation in the banking sector. Its strong information and communications technology (ICT) infrastructure and the growing fintech industry have undoubtedly spurred the overall development. Continuing the trend, but also managing the potential risks, such as mobile banking frauds, will be important for the South Korean banking industry in the future.

In the following 6 chapters, you will quickly find the 31 most important statistics relating to "Mobile banking in South Korea". 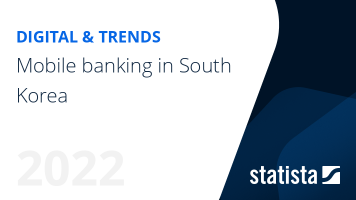 The most important key figures provide you with a compact summary of the topic of "Mobile banking in South Korea" and take you straight to the corresponding statistics.