The bicycle market in Germany has been enjoying dynamic development for a very long time. Bicycles are a popular way to get around in both urban and rural areas, with young children learning to ride firmly entrenched in the national culture. Germany has a variety of scenic bike routes, but looking out for bike lanes in a city is a daily part of life both for cyclists and pedestrians. Many cyclists value the multiple advantages cycling brings – physical activity, saving money by foregoing commuting with public transport or driving, and the eco-friendly aspect. In fact, cycling was on the list of actions taken by Germans to ensure sustainability through personal behavior.
In 2021, over 49.7 million people owned a bicycle. Other types of two-wheelers present in German households included motorcycles, e-bikes, moped and e-scooters. Cycling became a popular pastime during the coronavirus (COVID-19) pandemic and its subsequent lockdowns. As sports and fitness locations across the country were closed during 2020 and then 2021, consumers found themselves faced with having to come up with their own solutions for staying fit, and cycling was a quick answer. Additionally, cycling solved commuting questions for those who may have been anxious about using public transport. In 2021, bike sales revenue jumped significantly compared to the year before, with sales generating 6.56 billion euros.

Among bike models, e-bikes accounted for the largest share of bicycle sales revenue, at 43 percent in 2021. Other models making up the top three were trekking bikes and city/urban bikes. E-bikes are usually considered easier to ride due to being powered by a battery and motor, though cyclists still have to use pedals. The battery is charged electrically. On average, in 2021 a bicycle in Germany cost 1,395 euros.
Cycling is very widespread in Germany and bicycle sales figures prove it. A German city, Munster, even made it on the list of the eight most bike-friendly cities in the world.
This text provides general information. Statista assumes no liability for the information given being complete or correct. Due to varying update cycles, statistics can display more up-to-date data than referenced in the text.

Bicycle type most in demand in Germany
E-bike 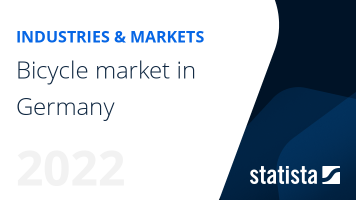 The most important key figures provide you with a compact summary of the topic of "Bicycle market in Germany" and take you straight to the corresponding statistics.