Tobacco smoking, linked to a wide range of health issues and diseases, has become less popular over the past few decades. As a result, the market for smoking cessation aids has grown. The electronic cigarette, or e-cigarette, is a prime example of this phenomenon. The European market experienced a growth of over 13 percent annually between 2013 and 2019.
In France, after a rather quiet entrance in 2005, these appliances experienced a more significant rise from 2010 onwards. Additionally, the recognition by the High Council of Public Health in 2016 that e-cigarettes could help with giving up smoking further fortified this increase.

As the country with the world’s third-largest share of users after China and the United Kingdom, France’s e-cigarette market is expected to maintain a positive annual growth rate over the next few years. Accordingly, the market revenue should exceed 997 million euros by 2025.

Behind the success of e-cigarettes

The success of electronic cigarettes can be attributed to three main factors: health, availability, and budget. First, even though the health effects of these devices are still unknown, e-cigarettes and similar technologies have been deemed less harmful than tobacco. Furthermore, these devices are often marketed as an effective way to stop smoking. Indeed, users can manage the nicotine level of their e-liquid themselves and can lower it gradually to ease the quitting process.

Another reason behind e-cigarettes’ popularity is their diversity and availability. Currently, these products exist in various shapes and sizes: cigalikes, vape pens, vape pods, mods, etc. They can be found online and in physical stores, whether larger retailers or smaller shops, making it increasingly easy for users to make the switch from regular cigarettes to their electronic cousins.

Vaping: nicotine on a budget?

Finally, the cost of vaping compared to that of smoking is another motivating factor for consumers. Indeed, on average, a French e-cigarette user spends between 240 and 840 euros annually on their habit, while a tobacco smoker’s budget ranges between 1,440 and 5,400 euros per year. It should be noted that this budget varies depending on the user's vaping habits and the way they use their electronic cigarette (direct inhaling, cloud chasing, etc.).

All in all, considering the continued increase in the price of cigarettes and the strengthening of anti-smoking policies, the market for electronic cigarettes should still enjoy a few years of prosperity.
This text provides general information. Statista assumes no liability for the information given being complete or correct. Due to varying update cycles, statistics can display more up-to-date data than referenced in the text.

Eloise Trenda
Research Expert covering global food topics with a focus on the French, Spanish, and LATAM markets
Get in touch with us now
Published by Eloise Trenda, Jan 18, 2022

Revenue forecast of the e-cigarette market in France for 2025
997.8m EUR

Breakdown of sales of electronic cigarettes in France 2020, by sales channel 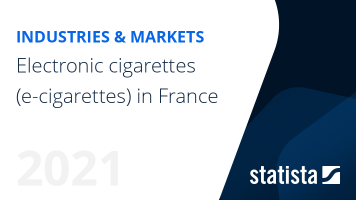 The most important key figures provide you with a compact summary of the topic of "Electronic cigarettes in France" and take you straight to the corresponding statistics.