Published by
Daniel Slotta,
Nov 18, 2022
Semiconductors are an integral building block of modern technology. They are not only installed in consumer electronics but are also critical for electronics used for infrastructure, manufacturing, and military application. China is a world technology leader and strives to maintain and expand on this reputation in a highly competitive market. China’s key focus areas of development include artificial intelligence and quantum computing, both of which rely heavily on semiconductor technology. However, supply chain disruptions as a result of COVID-19 and US sanctions have demonstrated the country’s supply vulnerability and confirmed Beijing’s belief that achieving autonomy in the semiconductor sector is crucial for China’s future development.

State of the industry

Despite accounting for more than half of global semiconductor sales, China’s manufacturing capacity is small. With a manufacturing capacity of only around five percent, the country is dwarfed by its global competitor, the United States, whose capacity reached over 40 percent. Although the country was able to increase its production volume of integrated circuits in 2020, the industry nonetheless felt the impact of disrupted supply chains to the extent that by the end of the year, many foundries were not able to operate at maximum capacity.

To break the dependence on foreign supply chains and increase self-reliance, the Chinese government has introduced a catalog of development plans to build a competitive domestic semiconductor industry. The most prominent campaign is China’s “Made in China 2025” initiative. It outlines key sectors that are crucial for the country’s future, including semiconductors. The plan has a designated investment fund valued at 340 billion yuan. These investments should allow China to source 40 percent of its semiconductors domestically by 2020, and by 2025, 70 percent of semiconductors are expected to come from domestic sources. However, as of 2020, the self-sufficiency rate reached only around 16 percent.

Achieving semiconductor autonomy hinges upon several factors. Only increasing the output of integrated circuits and other semiconductor products is not sufficient. One of the most important factors is the technological sophistication of the final product. However the necessary intellectual property is in large parts owned by American companies, much of the high-tech production machinery comes from the Dutch company ASML, and Taiwan is a world leader in semiconductor manufacturing infrastructure. As a result, to achieve a sufficient level of autonomy, mainland China has to catch up in all levels of the semiconductor supply chain.
The US sanctions on Chinese tech have shown just how dependent the country is on foreign technology. As of 2019, the United States included several Chinese companies on the so-called “Entity List” that restricts access to American technology, which effectively cut off access to semiconductors for many Chinese manufacturers like ZTE and Huawei. Furthermore, in a recent move, The United States directly targeted China’s largest semiconductor foundry SMIC, because its products may be put to military use. However, the sanctions also affect companies that are not based in mainland China. The Dutch government has come under pressure from the US government to stop the sale of an ASML manufactured lithography machine to China. Ultimately, this direct external pressure will only reassure the Chinese government that increasing semiconductor self-reliance is the only way forward.

In the following 7 chapters, you will quickly find the 36 most important statistics relating to "Semiconductors in China". 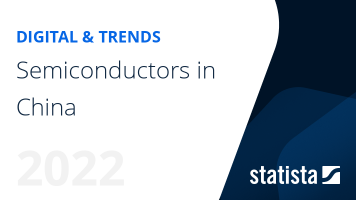 The most important key figures provide you with a compact summary of the topic of "Semiconductors in China" and take you straight to the corresponding statistics.