Published by
Yihan Ma,
Mar 11, 2022
In 2020, China’s merchandise trade surplus stood at 535 billion U.S. dollars, increasing continuously for two years. Being an economy heavily reliant on export, China ranked first among countries with the highest trade surplus in 2020, outperforming Germany by approximately 326 billion U.S. dollars. The United States, on the other hand, with imports exceeding exports by approximately 975 billion U.S. dollars that year, ranked first among leading import countries worldwide. Thanks to the ease of the trade war, In 2021, the United States regained the position of China’s most important export market.

The history of the U.S.-China trade relationship

In 1972, after years of hostility and isolation, U.S. President Richard Nixon paid China a visit. This tour changed diplomatic and trade relations between two nations. In 1972, China’s total merchandise trade value with the United States amounted to only 95 million U.S. dollars. In the next decade, the trade between China and the United States witnessed robust growth. When China joined the World Trade Organization in 2001, the bilateral trade value surpassed 120 billion U.S. dollars.

Since Coca-Cola became the first U.S. company that entered China in 1979, an increasing number of U.S. enterprises included China in their business plans. In 2020, 94 out of 121 U.S. enterprises listed on Global Fortune-500 had businesses in China. In that year, the actual utilized foreign direct investment from the U.S. to China stood at 2.3 billion U.S. dollars, while around 6.02 billion U.S. dollars of FDI flowed into the U.S. from China.

On July 6, 2018, the Trump administration officially imposed a 25 percent tariff on goods worth 34 billion U.S. dollars from China, marking the official launch of Trump’s tariff policy towards Beijing. While some Chinese experts were expressing their worries on social media about the impacts this trade war could have on China’s economy, the U.S.-based Brookings Institute published a report in which they claimed that in the high-tech field that Trump wanted to strike, the “added value” from China among these products was very low.

Another two rounds of the U.S. tariffs on Chinese goods followed in 2018, resulting in China’s retaliation, trade talks, and temporary truce agreed to in December that year. However, further negotiations in Beijing and Washington only resulted in more tariff increases in 2019 and 2020.

In early 2021, both countries reached an enforceable agreement to restore the relationship jeopardized by the trade war. The initial trade deal, known as the Phase One Agreement, demanded China expand its purchases on certain U.S. goods and services by a combined 200 billion U.S. dollars in the next two years. Nevertheless, by December 2021, figures showed that China only reached 57 percent of its commitment.

Though the two parties are working on finding a more concrete method to proceed with the second phase of the trade agreement, the clash of their different economic models, increasing geopolitical rivalry, and mistrust will likely keep the Sino-U.S. trade relations unstable in the years to come.

In the following 4 chapters, you will quickly find the 22 most important statistics relating to "Sino-U.S. trading relationship". 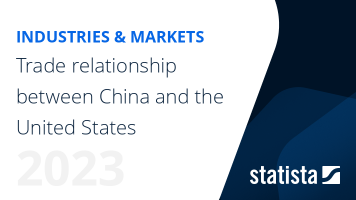 The most important key figures provide you with a compact summary of the topic of "Sino-U.S. trading relationship" and take you straight to the corresponding statistics.

China’s imports from the United States 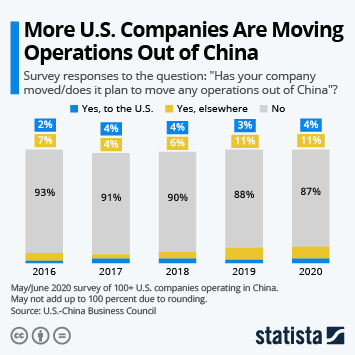 More U.S. Companies Are Moving Operations Out of China 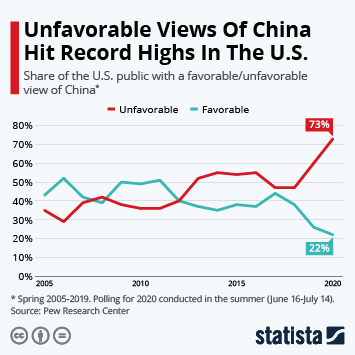 Unfavorable Views Of China Hit Record Highs In The U.S.