South Korea’s modern dairy industry started in the 19th century with the import of Holstein cows for milk production, and the first milk processing factory, Gyeongseong Milk Trade Association, was established in 1937 and is now known as Seoul Dairy Cooperative.
In recent years, dairy products have enjoyed a rise in popularity, with cheese becoming a popular topping for Korean dishes and milk serving as a snack or meal replacement. Accordingly, South Korea tried to increase the production of dairy products and launched the label “K-milk” for consumers who prefer purchasing domestic products. Due to the high consumption of dairy products, South Korea has become an important market for the dairy industry, often being used as a test market for products planned for Asian countries.

Although dairy production has not decreased over the last decade and the industry has overall been growing, domestic supply is not meeting the increasing demand, leading to heightened dairy imports. One of the most imported dairy products was cheese since the demand for it had increased sharply over the last decade. Among the main foreign suppliers for cheese in 2020, were the United States, New Zealand, and Germany.

How popular is cheese in South Korea?

Cheese has become a popular topping or addition to various Korean dishes, resulting in significantly increased consumption volumes. Korean cuisine is known for being rather spicy, as chili can be used to balance greasiness, and cheese helps in turn to reduce the spiciness. Over a quarter of South Korean consumers stated in a survey in 2021 that they had consumed cheese at least once during the last three months and if they consumed cheese, the majority consumed it multiple times a week.

Flavored milk in particular has become a popular snack, with Binggrae’s Banana milk becoming the flavored milk to buy when out and about. The consumption of regular milk had decreased overall, but still, the majority of South Koreans who consumed milk did so multiple times a week. Milk sales to primary schools made up around 5.5 percent of the domestic consumption of regular milk. The milk is usually distributed in primary school classes and pre-school to increase vitamin intake and achieve balanced diets. However, as South Koreans become more health-conscious and aware of animal welfare issues, more consumers are trying organic products or plant-based alternatives, leading to a growing milk alternatives market.
This text provides general information. Statista assumes no liability for the information given being complete or correct. Due to varying update cycles, statistics can display more up-to-date data than referenced in the text. 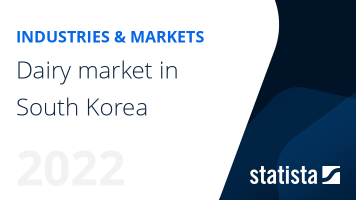 The most important key figures provide you with a compact summary of the topic of "Dairy market in South Korea" and take you straight to the corresponding statistics.