Since the 1990s, China’s dairy industry has witnessed a surge prompted by economic and social changes and is expected to continue to grow. Although the vast majority of the Chinese population are lactose intolerant, thanks to the increasing disposable income, innovative products, changes in diet, and health awareness, dairy consumption is growing while the industry undergoes rapid development and modernization. Currently, China is the largest dairy product and egg market in terms of sales revenue and the second-largest dairy importer globally.

In 2008, the widespread melamine scandal severely disrupted China’s milk production as well as consumer confidence and trust in dairy producers. Since then, the government has taken steps to enforce new regulations and gain better control over the quality and safety of domestic dairy products. Due to these restructuring processes, many small farmers had to exit the market, which translated into a noticeable decline in milk production in 2013 and 2016. Currently, two major dairy processors – Inner Mongolia Yili Industrial Group and China Mengniu Dairy Company – dominate the market.

Most recently, dairy production volumes are picking up again. Nevertheless, China still relies heavily on dairy imports. New Zealand is the leading dairy supplier for the Chinese market accounting for over one-third of all imports. Liquid milk, whole milk powder, and whey were the main imported dairy products in terms of import volume.

A market with huge potential

As Chinese consumers are becoming increasingly familiar with western lifestyles and food, the demand for dairy products, especially cheese, is predicted to soar. The cheese sales are expected to grow by around 11.5 percent between 2019 and 2024. Butter, yogurt, and sour-milk products are also among the increasingly demanded dairy product categories. Many Chinese consumers generally associate products like yogurt and sour milk with benefits to health, especially for the digestive system.

Despite the increase in dairy imports and sales, dairy consumption per capita is still much lower in China than in the rest of the world, even compared to countries like Japan, which shares similar dietary habits to China. Therefore, Chinese dairy market expansion will likely be driven more by the rising price of raw milk and increased premium product options. Surveys show that more urban Chinese consumers are willing to spend money on niche, high-end, organic, and healthier products, hence slowly shifting the dairy industry development direction from scale growth to product upgrade.
This text provides general information. Statista assumes no liability for the information given being complete or correct. Due to varying update cycles, statistics can display more up-to-date data than referenced in the text.

Yihan Ma
Research expert covering e-commerce and FMCG in Greater China
Get in touch with us now
Published by Yihan Ma, May 12, 2021

Revenue of the dairy products & eggs market worldwide 2021, by country 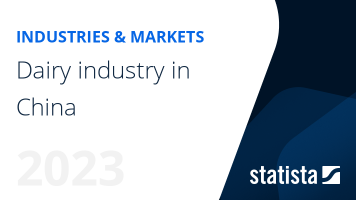 The most important key figures provide you with a compact summary of the topic of "Dairy industry in China" and take you straight to the corresponding statistics.