Published by Statista Research Department, Oct 5, 2022
The Scandinavian home aesthetic is appreciated and replicated not only in its home region, but also in the whole world. In recent years, the Danish and Norwegian word “hygge” (which can be roughly translated as coziness) and the philosophy attached to it have attracted a lot of interest and inspired many home improvement projects also outside that region. It is then perhaps unsurprising that the theme carries some weight for Scandinavian people themselves.
Retail sales of hardware, paints, and glass in specialized stores in Norway reached roughly 32.7 billion Norwegian kroner in 2020, a country where there were, as of 2020, 8,655 inhabitants per home improvement store. Sweden, which had the lowest number of inhabitants per home improvement store among the Nordics, also had one of the lowest shares of households that outsourced home improvement in Europe, as less than half of the households outsourced their projects.

The construction, iron, and paint trade saw one of the strongest developments of the industry in 2020. That year, the category saw sales growth of over 17 percent in Sweden, in comparison to the previous year. Dahl, the country’s leading plumbing wholesaler, led the ranking of the Swedish DIY industry, reaching a turnover of over eight billion Swedish kroner as of January 2020. In Norway, the first position went to Optimera, which had generated turnover of over 10 billion Norwegian kroner as of September 2020.

Danish households spent just under three billion euros on furniture, home furnishings, and floor coverings in 2019. In Norway, equipment for house and garden use generated roughly 12.5 billion Norwegian kroner from Norwegian households, and the household upkeep spending per capita in the country is expected to reach roughly 1,912 U.S. dollars by 2025.

In the following 4 chapters, you will quickly find the 25 most important statistics relating to "DIY, home improvement and furniture retail in Scandinavia". 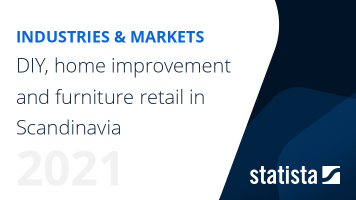 The most important key figures provide you with a compact summary of the topic of "DIY, home improvement and furniture retail in Scandinavia" and take you straight to the corresponding statistics.

DIY and home improvement in Europe

DIY and home improvement market in the UK

DIY and home improvement in the U.S.