Corn in the U.S. - statistics & facts

The U.S. is also the world's leading exporter of corn with over 2.75 billion bushels exported in 2020, whereas the import volume is relatively small. Among the leading buyers of U.S. corn were China, Mexico, and Japan in 2021. In 2021, over 85 million acres of corn were harvested for grain in the U.S. and the three leading U.S. states in corn cultivation were Iowa, Illinois, and Nebraska that year.

Over the last seven decades, U.S. prices per one metric ton of corn showed high volatilities but were rapidly increasing in the last years. A new peak price was reached in summer 2012 , attributable especially to the tremendous drought in most of the major agricultural U.S. states. In the subsequent crop years of 2013 through 2016, prices dropped again. Corn is increasingly utilized in the production of industrial ethanol. In 2020/2021, almost a quarter of all corn was used for this purpose in the United States.

In the following 4 chapters, you will quickly find the 24 most important statistics relating to "Corn in the U.S.". 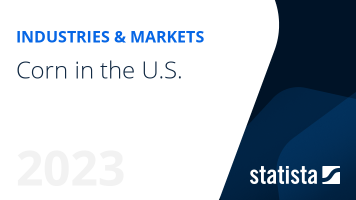 Go to report Corn in the U.S.
Top Seller

The most important key figures provide you with a compact summary of the topic of "Corn in the U.S." and take you straight to the corresponding statistics.

Area and production in the U.S.

Trade and prices in the U.S.

Utilization and consumption in the U.S.

Grains and cereals market in Argentina