Wheat is the second largest grain worldwide based on grain acreage and total production volume. The global production volume of wheat came to about over 778 million metric tons in the marketing year of 2021/22. This was an increase of about four million tons compared to the previous year. Wheat stocks is also forecast to increase to about 286 million metric tons worldwide by 2022/2023.

The European Union is the top ranked wheat producing region. It was forecast that the region yield more than 126.7 million metric tons of wheat by 2031, accounting for about one-fifth of the world wheat production. In 2021, around 46.7 million were planted and 37 million acres of wheat were harvested in the United States. Almost every U.S. state is involved in the nation’s wheat production, with the ‘Wheat State’ Kansas and North Dakota producing the largest volume. Many developing countries are highly dependent on the Ukraine and Russia's wheat imports. As of June 2022, Armenia and Mongolia fully relied on Russia for meslin and wheat imports. Laos reported the most significant dependence on meslin and wheat supplies from Ukraine, at over 98 percent of total imports of these commodities

As one of the most important staple foods, a large variety of different products contain high amounts of wheat. Global consumption of wheat saw a slight increase over the last year, with over 793 million metric tons consumed in 2021/2022 marketing year. In that year, China consumed about 150 million metric tons of wheat. The global per capita food use of wheat stood at above 66 kilograms per year in the last decade.
This text provides general information. Statista assumes no liability for the information given being complete or correct. Due to varying update cycles, statistics can display more up-to-date data than referenced in the text.

Global per capita food use of wheat
67.7kg/yr 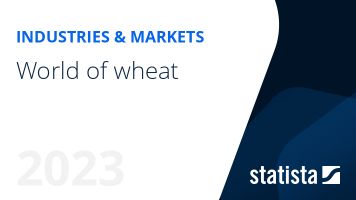 The most important key figures provide you with a compact summary of the topic of "Wheat worldwide" and take you straight to the corresponding statistics.

Wheat in the U.S.