88.9k
Tesla unveiled its first heavy duty truck, the Semi, on Thursday, ticking another checkbox in its quest to electrify transportation and reduce greenhouse gas emissions. The all-electric big rig is designed to have a 500 mile range and surpass diesel-powered trucks in driving performance and safety. Tesla isn’t the first company to foray into electric trucks though. Industry heavyweights such as Mercedes-Benz also have skin in the game, albeit their designs aren’t as futuristic as Tesla’s spaceship-like Semi.

As our chart illustrates, the electrification of freight transport on the road does make sense from an ecological point of view. Medium and heavy duty trucks accounted for 23 percent of transportation-related greenhouse gas emissions and roughly 6 percent of total GHG emissions in the United States in 2015, according to the EPA. Airplanes, commercial and non-commercial (i.e. military and other), account for less than half of what freight trucks emit every year.

Tesla aims to begin production on the Semi in 2019, but keeping in mind the company’s track record of hitting its production targets, it wouldn’t be a huge surprise to see the production start pushed to a later date. The design of the Semi may help Tesla to avoid the usual “production hell” though: it shares many parts with the Model 3, which should be well into mass production by 2019. 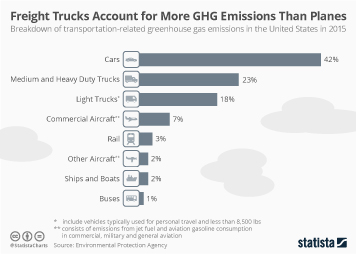 This chart provides a breakdown of transportation-related greenhouse gas emissions in the United States in 2015.