88.9k
Just a few months after Uber acquired Jump, the company’s largest competitor Lyft is making inroads into bike-sharing as well. On Monday, the company announced its acquisition of Motivate, one of the leading bike-sharing companies in the United States. According to Lyft, 80 percent of all trips on shared bicycles in the U.S. were made on systems operated by Motivate, such as Citi Bike in New York City and Ford’s GoBike program in San Francisco.

“Lyft and Motivate have both been committed for years to the same goal of reducing the need for personal car ownership by providing reliable and affordable ways to move around our cities,” John Zimmer, Lyft co-founder and president, explained in a statement on Monday, adding that bike-sharing “is a natural extension of Lyft's core approach to improving transportation access […] through offerings such as shared rides and the integration of public transit in our app”.

As the following chart, based on data compiled by the Bike-sharing Blog, shows, bike-sharing has really clicked into a higher gear in recent years. Many metropolises are trying to curb congestion and pollution by reducing the number of cars on inner-city roads by improving biking infrastructure and rolling out new sharing programs. As of May 2018, more than 1,600 bike-sharing programs were in operation worldwide, providing more than 18 million bicycles for public use. 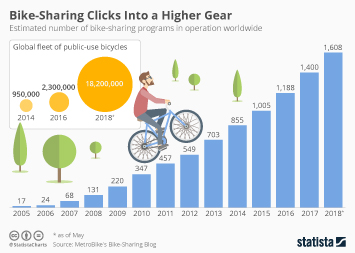 This chart shows the number of bike-sharing programs in operation worldwide.