Skip to main content
53k
74.6k
87k
88.9k
There is no end in sight to the U.S. drug crisis. The Centers for Disease Control and Prevention have published new figures showing that there were 70,237 deaths from drug overdoses in the U.S. last year which is a record high. While the overall rate of deaths from overdoses increased 9.6 percent between 2016 and 2017, the death rate from synthetic opioids such as fentanyl skyrocketed by 45 percent. According to CDC, the age-adjusted rate of drug overdose deaths in the U.S. was 6.1 per 100,000 people in 1999 and that soared to 21.7 in 2017.

The following infographic provides an overview of the situation, focusing on different opioid categories. While overdose deaths due to heroin and natural and semisynthetic opioids are cause for serious concern, the soaring death rate due to synthetic opioids like fentanyl is truly alarming. Recently, the U.S. government warned that a considerable rise in cocaine deaths was exacerbated by the drug being laced with fentanyl with is up to 50 times more potent than heroin. In 1999, drugs like fentanyl were responsible for 0.3 deaths per 100,000 people and last year, that had increased sharply to 9. 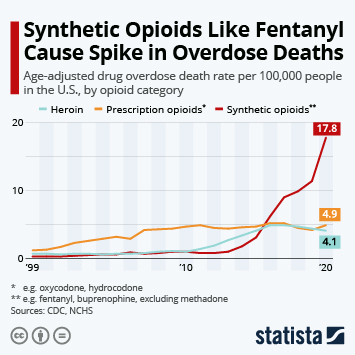