Every smartphone users know the dilemma: It doesn't matter how great your latest-generation smartphone is or which cutting-edge features it contains - the device still runs on old-fashioned electricity it draws from its battery, often the weakest part of the phone. With the number of apps people use and time they spend on their smartphone increasing, battery woes are all too common - the prevalence of powerbanks and charging stations popping up in different places certainly tell that story.

Some smartphone makers have tried to remedy this problem by bringing phones with really big batteries to the market. According to phone comparison website Phone Arena, the phone with the largest battery to-date is the Asus ROG II with a battery charge of 6,000 milliampere hours, followed by the Xiaomi Mi Max 2 (5,300 mAh).

But milliampere hours alone do not determine how long a phone battery will actually last. Display size, resolution and how efficiently a device uses power play a role too. Recently, an Apple product has made it onto the list. The iPhone 11 comes was tested to last almost 13 hours and 30 minutes, therefore using its 3,110 mAh battery quite efficiently.

This chart uses data from Phone Arena, which tests phones using a custom web script that mimics real-life use at a screen brightness rate of 200 nit (luminance). These use durations are well below those that phone manufacturers use to market their phones and also below those measured in continuous use (e.g. playing a really long video). In this test, the Motorola Moto G7 Power lived up to its name by lasting more than 20 hours on its battery. The aforementioned Xiaomi Mi Max 2 placed second with a use time of almost 17.5 hours, ahead of the LG X Power, whose battery lasted more than 15 hours. 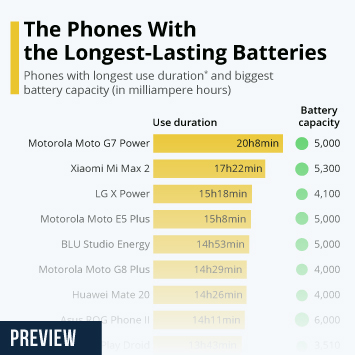 This chart shows the smartphones with the longest-lasting batteries on the market.