53k
74.6k
87k
88.9k
All of Boeing's 737 MAX jets have been grounded after Ethiopian Airline Flight 302 crashed soon after take-off earlier this week, marking the second accident involving this particular model in less than six months. The fatal accident killed all 157 people on board the flight traveling from Addis Ababa to Nairobi. The first incident occurred last October, when 189 people were killed on a Lion Air flight in Indonesia, shortly after take-off as well.

President Trump grounded the rest of the planes in circulation Wednesday afternoon. The United States was the last country to ground all Boeing 737 MAX flights. The declaration comes just a day after the Federal Aviation Administration, the agency that oversees airline safety, pushed back against calls to ground the planes. On Tuesday the FAA said it had found “no systemic performance issues” with the model, before reversing course on Wednesday.

The two accidents pose a serious problem for Boeing, as the 737 model is the company’s biggest selling product, with over 580 deliveries and 760 new orders last year. Just under half of those deliveries were for the MAX 8 edition, the model at the center of both accidents. More importantly though, almost all 737 orders Boeing received last year were for the MAX model as well, illustrating how important the plane in question is for the company’s present and future.

Prior to the second crash, the Boeing 737 MAX was widely criticized by pilots and flight attendants for the lack of training and poor communication on its anti-stall system. New 737 jets have an automatic mechanism that readjusts the plane if the system believes the aircraft is flying at an angle steep enough to put it at risk of stalling. While investigations into both tragedies have yet to definitively confirm the reasons behind each crash, the anti-stall system is believed to have played a role in both cases. 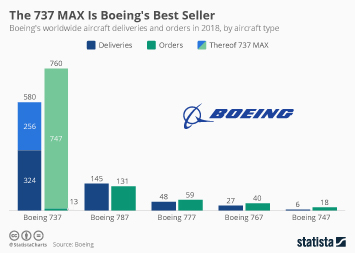 This chart shows Boeing's worldwide aircraft orders and deliveries in 2018, by aircraft type.