Published by
Erick Burgueño Salas,
Sep 6, 2022
The global aerospace services market is worth over three trillion U.S. dollars, with key markets in the United States, France, Germany, and the UK. Two of the largest aerospace and defense manufacturers in the world are Boeing and Airbus with revenue streams of about 62.3 billion U.S. dollars and 52.1 billion euros, respectively. The list of competitors includes Bombardier and Embraer, as well as the Commercial Aircraft Corporation of China (Comac).

History of Airbus and Boeing

Airbus Group serves as Europe's counterpart to the Boeing Company. During the mid-1990s, several European aerospace and defense contractors, such as DaimlerChrysler Aerospace (DASA) and Aérospatiale-Matra, were looking to take advantage of the newly formed European Union and eurozone by merging into a single entity. The resulting merger took place in July of 2000 and led to a newly formed company known as the European Aeronautic Defence and Space Company (EADS). After 14 years of operation, EADS reorganized the company into the Airbus Group, with three primary divisions in aircraft, airspace, and helicopter manufacturing.
The Boeing Company was incorporated in 1916 by William E. Boeing out of Seattle, Washington as "Pacific Aero Products Co". Boeing's background in wooden structure design is believed to have inspired his future design and assembly of airplanes. To benefit from the abundance of spruce wood in the area, Seattle remained as the primary manufacturing location.

Today, the Airbus Group has several manufacturing sites across Europe, while employing 126,500 people globally. Boeing has become one of the largest manufacturers of commercial aircraft and an important defense contractor for many countries worldwide. Boeing’s 737 aircraft series have emerged as the company’s best sellers. However, the 737 MAX 8 aircraft model has come under scrutiny after a sequence of crashes. Boeing 737 gross orders experienced a slump in 2019, and cancellations outpaced new orders for the 737 model family.

Impact of coronavirus on Airbus and Boeing

The COVID-19 pandemic hit the aviation industry to a great extent. This was mostly due to the nature of business activities that require close proximity between passengers for many hours to travel across the globe. Countries across the world imposed lockdown measures to contain the spread of the virus which impeded airline groups to operate for many months. Thus, the entire aviation industry is in a large recessionary business cycle. Therefore, most of the air carriers cancelled mainline aircraft orders to reduce risk exposures and financial commitments. As of July 2020, over 300 Boeing 737 Max and roughly 29 Airbus A320 family aircraft orders were cancelled.
After the lifting of travel restrictions by governments around the world in 2021, Airbus and Boeing started to takeoff, reporting both increases in their aircraft deliveries during that year. In 2021, Airbus and Boeing delivered 611 and 340 aircrafts respectively.

In the following 4 chapters, you will quickly find the 30 most important statistics relating to "Airbus and Boeing". 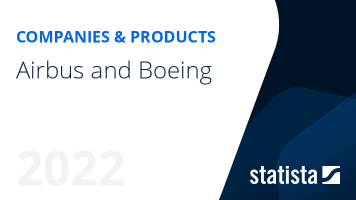 The most important key figures provide you with a compact summary of the topic of "Airbus and Boeing" and take you straight to the corresponding statistics.

Aviation and aerospace industries in Germany

Air transportation safety in the U.S. 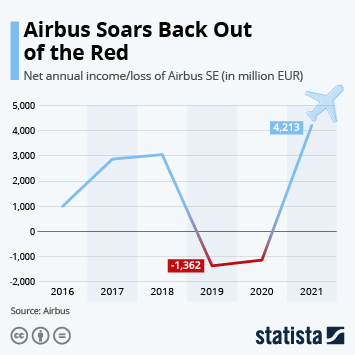 Airbus Soars Back Out of the Red 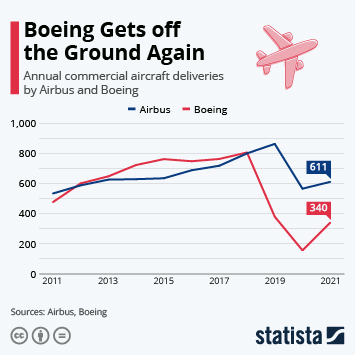 Boeing Gets off the Ground Again