The number of people executed under the death penalty increased by 20 percent in 2021, according to a landmark report by Amnesty International, with the global death toll hitting 579 people, up from 483 the year before. At the same time, the number of death penalty sentences handed out by judges saw an increase of 40 percent, with a total of 2,052 being sentenced. This increase partly comes down to the fact that courts were closed through the pandemic. This gave the impression of a decline in the number of death penalties doled out, when in actual fact, they were just delayed. By the end of 2021, a minimum of 28,670 people were under sentence of death worldwide.

According to Amnesty, one of the main reasons for the increase comes from Iran, which saw a 28 percent increase in executions, rising from 246 in 2020 to 314 people being killed in 2021. Of these cases, 132 were drug-related offenses. Myanmar also saw a rise in death sentences, with 86 people being given death sentences under martial law, as Saudi Arabia’s numbers more than doubled from 27 to 65 people. This grim trend has continued into this year, when 81 people were put to death in the country.

China continued to be considered the most serious executioner, with deaths expected to be in their thousands. Our chart excludes these figures, however, as the secrecy of the state means that exact death count remains unknown. Amnesty said that figures are also unknown for North Korea and Vietnam, and adds that the total yearly figures represent the minimum values. 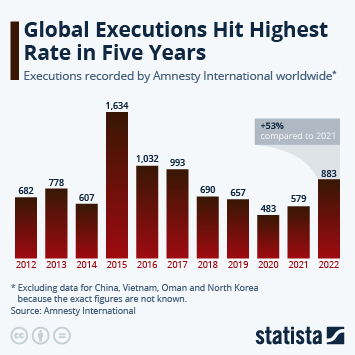