After top Iranian military commander Qassem Soleimani was killed by a U.S. missile on Friday in Baghdad, Washington is awaiting retaliation from Iran. The Trump administration has said repeatedly that Soleimani's assassination was in connection with his role in Iran's strategy to back different militia other destabilizing armed groups throughout the Middle East. Our graphic shows what that means using a report from The Soufan Center that sheds light on Iran's grand strategy and "playbook" in the Middle East.

Tensions between the U.S. and Iran had already started rising in May of 2019 after several tankers were "sabotaged" off the UAE coast. The New York Times reported then that National Security Advisor John Bolton ordered a military contingency plan to be presented to senior White House security officials which involves the deployment of 120,000 U.S. troops to the Middle East. That came after Bolton announced that a U.S. carrier strike group centered around the USS Abraham Lincoln would be deployed to the region along with B-52 heavy bombers.

Iran has not developed its capabilities and regional strength in order to prevail in a conventional 21st century conflict. It has rather focused on pumping money and military hardware into regional allies, proxies and militias with the aim of spreading political prosperity and enabling them to project power in the region and beyond. Along with training and arms shipments, soft power (financial, political, diplomatic, public relationship and other non-military mechanisms) is an important cog in Tehran's strategy. This allows it to portray itself as strong economically as well as enabling it to build political support overseas and insulate it proxies and allies. Examples of this include its investments in a major port project in Oman as well as its substantial gas exports to neighboring Iraq. Iran has also taken advantage of the rift between Saudi Arabia, the GCC and Qatar. It has moved to increase food exports to Doha and granted Qatar Airways the use of its airspace.

Given the extent of its regional activities, how much money is it actually pumping into its neighbors? The Soufan Center's research shows where Iranian money is flowing in the Middle East and where Iranian-backed proxies and militant groups are active. Syria receives an estimated $6 billion annually of economic aid, subsidized oil, commodity transfers and military aid. Iraq receives up to $1 billion, some of which ends up in the hands of militia organizations. Lebanon, which is of course home to Hezbollah, sees around $700 million of financial support, practically all of which goes to the militant group. 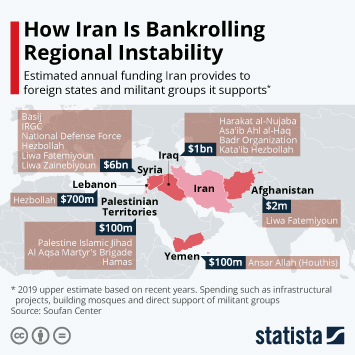