The number of unicorns - private, startup companies valued at US$1 billion or more - has been growing rapidly in India. According to CB Insights, there are currently 32 unicorn companies in India - eight of which were added in 2021 to date. According to a report by Bloomberg, the count could be as high as nine new additions, as the news site also mentions online pharmacy API Holdings as a new unicorn which was not listed on CB Insights (yet).

New additions to the list dealt in software and finance/fintech to a higher degree, while delivery and transportation services were most common among the unicorns with the highest valuations.

One97 Communications, makers of e-commerce platform Paytm Mall, remained the most valuable startup in India this spring with a value of $16 billion as of April 2021. The startups second and third on the list deal in online education (BYJU’s) and accomodation (OYO).

Backers of these highly-valued, up-and-coming companies include Chinese e-commerce giant Alibaba, who invested in Paytm Mall and Zomato, while Japanese player Softbank is bankrolling OYO and the majority of the Paytm Mall account.

Out of the 32 Indian unicorn startups, eight were added in 2021 to date, while only seven were added in 2020 throughout the whole year. 2019 and 2018 saw six and four new unicorns be created in India, respectively. Seven more became unicorns even earlier, the oldest being Ola Cabs, e-commerce platform Snapdeal and mobile advertiser InMobi, all joining the list of unicorns in 2014. 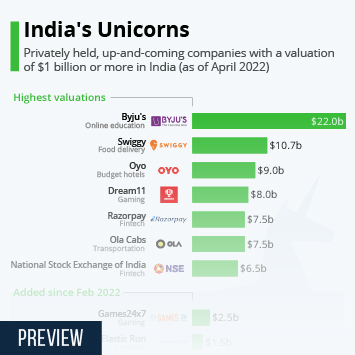 This chart shows unicorn startups from India (as of April 2021).