Skip to main content
53k
74.6k
87k
88.9k
Having a bank account and being able to withdraw or transfer money at any time is one of the things that people in developed countries take for granted, like clean water, electricity or, to a lesser extent, internet access. In many regions of the world, however, access to basic financial services is anything but given with 1.7 billion people still “unbanked” in 2017 according to the World Bank.

As the following chart shows, having a bank account or access to a mobile payment service is the exception rather than the rule in many countries, particularly across Sub-Saharan Africa. While China and India host the largest unbanked populations in absolute terms with 224 and 191 million adults, respectively, not having a bank account is most widespread in South Sudan, the Central African Republic and Afghanistan, where more than 80 percent of the adult population lack access to the financial system.

Considering that access to basic financial services are an important driver of economic empowerment, these figures are alarming and they’re one of the reasons behind Facebook’s latest initiative, the cryptocurrency Libra. “Libra’s mission is to enable a simple global currency and financial infrastructure that empowers billions of people”, the currency’s mission statement reads. Considering that 2.1 billion people use one of Facebook’s social media and messaging services each day, putting that reach to good use doesn’t sound like a bad idea. 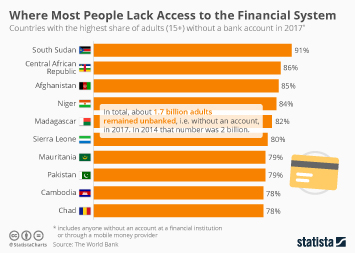