53k
74.6k
87k
88.9k
The U.S. dollar is stronger than (almost) ever, as seen in the dollar trade weighted exchange indexes that pits the currency against those of major trading partners as well as other major currencies.

While the dollar had its strongest decade in the 1960s, it has also made remarkable gains recently. It came back after losses in the financial crisis and even surged 25 percent as soon as 2009. While one British pound, for example, would have been able to buy almost two U.S. dollars as recent as 2007, that rate is now one pound to US$1.20. The Euro weakened against the dollar as well. One Euro was worth US$1.33 in the beginning of 2007 and now is priced at only US$1.12.

The strength of the dollar has advantages (namely cheaper imports) but there have been many critical of the strong dollar, including U.S. President Donald Trump. Trump said last week that he would support a FED policy weakening the dollar, because it would aid U.S. companies doing business abroad. Currently, businesses who have to convert foreign earnings back into dollars are getting out less and are therefore potentially less competitive.

Trump has blamed federal interest rates, which are currently higher in the U.S. but remain at zero in Europe, for the strengthening of the dollar. The unequal rates are in fact a major draw for investors to move assets to the U.S. As more people buy (in) dollars, the demand for the currency goes up, strengthening it. China’s Central Bank, for example, has been accused of keeping its currency artificially low to be very competitive in the global marketplace.

Conversely, Trump has in the past also lauded investors and foreign companies drawn to the U.S. because of good interest rates and the opportunity to make profits in (strong) dollars.

The FED said at the beginning of August, after lowering interest rates for the first time since 2015, that they wanted to aid U.S. companies not because of the strong dollar but to make up for weakening global demand and an economic slowdown. While lower interest rates could mean a weaker dollar and the ensuing advantages in the short run, a global race for the lowest currency rate would only hurt already weak economic prospect further. 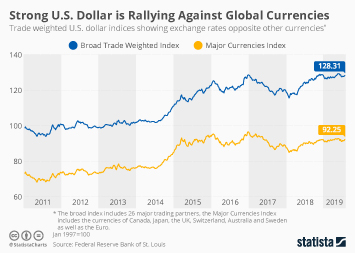 This chart shows exchange rate indexes of the U.S. dollar opposite other global currencies.