Non-fungible tokens (NFTs) are possibly the most cryptic crypto trend at the moment. These blockchain assets are based on songs, pictures or videos, which are assigned unique, non-exchangeable or replicable blockchain addresses. These addresses can be bought, sold or swapped like you would a trading card. NFT sales of artwork and sports clips have been making headlines for a while, but the real hot topic in the NFT market at the moment are memes. Several people whose pictures have become famous as memes have been able to cash in on their involuntary household name status.

Much like cryptocurrency, NFTs live off of the perceived value that they hold in the eyes of the public. Since they are separate from copyrights, NFTs can technically be minted by anyone. But those which are released (presumably only once) by the work’s creator or an official body would be expected to build and retain the most value because of their exclusivity, just like real-world collectibles would. With memes, the perceived worth of the NFT is derived from the sale by the depicted, not the creator.

Within the meme phenomenon, certain photos and video clips have risen to international comedy fame after having been adapted and re-adapted over and over on the internet to be shared online for amusement. Many of these photos which popular memes are based on display regular people whose portraits struck a nerve with internet audiences and who were turned into characters for the sake of the respective memes – like "Bad Luck Brian" (Ohio resident Kyle Craven) and "Overly Attached Girlfriend" (Laina Morris from Denton, Texas).

Craven and Morris are among those meme personalities who recently cashed in on their meme fame through an NFT sale. Chris Torres, the creator of famous meme Nyan Cat (which is not a depiction of himself but a short cartoon video clip of a flying cat) launched a series of successful meme NFT auctions. He sold Nyan Cat for about 300 units of the cryptocurrency Ethereum - around $516,000 at the time of the auction. The “Overly Attached Girlfriend” NFT brought in almost as much at around $460,000, while “Bad Luck Brian” wasn’t as lucky and only brought home around $45,500.

The most profitable meme NFT to date is “Disaster Girl,” which brought in more than $573,000 at auction. The picture shows a mischievously grinning girl in front of a burning house. At the time her picture was taken by her dad at a fire department drill, Zoe Roth was only four years old. Now at the age of 21, the North Carolinian has found a way to capitalize on her involuntary fame.

Winning bids at the displayed NFT meme auctions were paid for with the cryptocurrency Ethereum. The conversion into U.S. dollars is shown at the time of the auction. Meanwhile, the hype around NFTs has led to an increase in the Ethereum exchange rate, meaning those meme personalities made even more money from these auctions if they held on to their cryptocurrency assets. 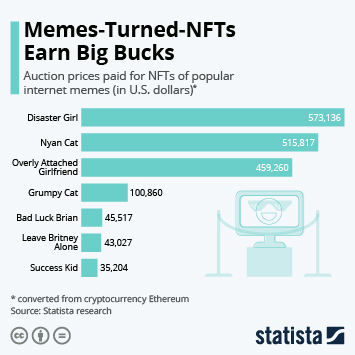