88.9k
YouTube and Google, its parent company, will pay $170 million to settle a case with the FTC, where the company is accused of violating the U.S.’s data privacy law protecting children.

This settlement is the largest fine the FTC has wielded against a company in the twenty years that the Children's Online Privacy Protection Act (COPPA) has been the law. COPPA regulates what data advertisers can collect from children under the age of 13. COPPA compliant websites must be transparent about data practices and obtain parental consent before gathering information on children.

Despite being a historic fine for the FTC, the $170 million settlement is less than a fraction of the revenue Google brought in Q2 2019 alone. The settlement does top the $22.1 million fine the FTC levied against Google in 2012 for another privacy breach. In 2012, the fine Google had to pay was an even smaller fraction of their revenue than the fine issued this week.

The Federal Trade Commission vote fell along the party lines of the commissioners, with Democrats writing in their dissent that the fine does not go far enough. The dissenting commissioners took issue with the lack of individual accountability at YouTube, the absences of any change to the company’s financial incentives, and the low value of the fine, which they believe is not steep enough to deter YouTube or other companies from breaking the law again.

Among other firsts, the settlement pursued YouTube based on actions committed by third-party users on its site, something other settlements have not ventured to do. Despite this, when the indictment was released yesterday, Google did not issue a warning to investors. Alphabet stock was up 1.1 percent at the close of trading Wednesday. 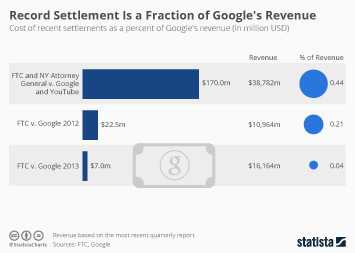 This is the cost of recent settlement as a percent of Google's revenue (in million USD).