Google is a California-based, multinational internet company which provides digital products and services such as online search and advertising, cloud computing and software. As of January 2022, Google sites were ranked first amongst the most visited multi-platform web properties in the United States with just over 270 million U.S. unique visitors and a market share of 61.4 percent among the leading U.S. search engine providers. Parent company Alphabet's market capitalization in February 2021 was valued at 1.79 trillion U.S. dollars. In 2015, American multinational conglomerate Alphabet Inc. was created as the parent company of Google and several other companies previously owned by or tied to Google. The reorganization of Google into Alphabet was completed on October 2, 2015.

There are many localized versions of the Google Search available. Among the leading search engines, the worldwide market share of Google in January 2022 was 88.6 percent. Although Google’s product originally was based upon online search, the company has significantly broadened its services throughout the years. Video content sharing site YouTube was one of Google’s most prolific and expensive acquisitions and has been heavily integrated into Google’s online presence, its worldwide ubiquity changing the dynamics of user generated content and online video curation. YouTube is popular among all age groups.

Apart from online search, advertising and online video, Google has branched out into further content, most notably the Android mobile operating system which as of January 2022 accounted for almost 70 percent of the global smartphone operating system market. Content for Android devices can be purchased via the Google Play Store, a digital application distribution platform through which over 2.6 million apps are available.

Google has a wide range of products, including but not limited to the Chrome browser and operating system ChromeOS, hardware including the Chromecast and company's series of mobile devices such as the Nexus and Pixel devices, as well as online payment system Google Pay. Recently, Google has been making inroads in the virtual assistant market by releasing Google Now and Google Assistant. The company is currently investing in voice-controlled smart-home speakers and devices such as its Google Home series. With the growth of voice search and increasing usage of digital assistants, this is hardly a surprising move.
This text provides general information. Statista assumes no liability for the information given being complete or correct. Due to varying update cycles, statistics can display more up-to-date data than referenced in the text.

J. Clement
Research lead covering internet and gaming
Get in touch with us now
Published by J. Clement, Nov 17, 2022 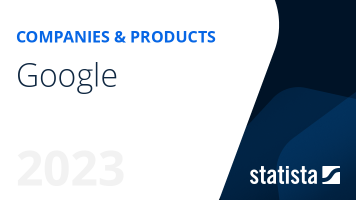 The most important key figures provide you with a compact summary of the topic of "Google" and take you straight to the corresponding statistics.