An analysis of data by the Conference Board shows that Libya, Iraq and Argentina are the countries which posted the most years of negative GDP growth since 1951.

Other than "failed states" Libya and Iraq, Argentina has not experienced a protracted civil war in recent year, even though the country suffered its fair share of insurgency in the 1950s, 1960s and 1970s in connection with the dictatorship led by Juan Domingo Perón. Still, the country has been battling economic woes in the current age with on-and-off-again recessions. While Argentina might be more developed than others on the list, it has been caught up in a cycle of overspending, inflation, debt-making, unsustainable cuts to government programs and bad fiscal policy.

Among the countries which currently are in a prolonged recession are Venezuela, Sudan and Lebanon, which are all expected to go into their fourth recession year in 2021. After three years in recession, Argentina is expected to grow again in 2021, but that prospect is more than shaky amid the ongoing coronavirus pandemic.

Other countries which have struggled with recessions include the Democratic Republic of the Congo, one of the least developed countries in Africa, followed by Syria and Chad, a landlocked African country where 85 percent of the population depend on agriculture for their livelihoods.

For former Soviet and Yugoslav Republics, data is only available starting in 1971. Nevertheless, Ukraine and Moldova appear in rank 9 and 10 out of 124 countries and territories, showcasing the severe impact the fall of Communism has had. Between 1990 and 1999 Ukraine experienced ten consecutive recession years, while Moldova posted nine. Counting only from 1971 onward would put Ukraine fourth and Moldova sixth in the ranking, while Croatia would come 12th. 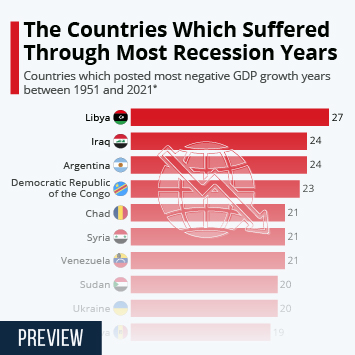 This chart shows the countries which posted the most years of negative GDP growth since 1951.