Published by
Aaron O'Neill,
Nov 17, 2021
Argentina is a country located in South America. Not only is it the second largest country in Latin America by total area, but it is also the eighth largest in the world. A member of the G-15 and G-20 economies, Argentina boasts the third-largest economy in Latin America. In addition, Argentina is a founding member of the United Nations, WTO, World Bank Group, CELAC, and OEI.
The country has a total estimated population of approximately 45.8 million inhabitants. The capital and largest city, Buenos Aires, is home to over 15.2 million people, making it the most populated city in Argentina by far. Despite a slight decline of the fertility rate over the last decade, population growth has hardly decreased.

A long history of crises

Between 1998 and 2002, Argentina experienced a massive economic depression. The depression was a result of the Russian and Brazilian financial crises. Unemployment, inflation and debt rates in Argentina skyrocketed. This caused Argentina to default of its sovereign debts, leaving a legacy of poor fiscal discipline in an atmosphere of high borrowing fees that has been fueled by political rhetoric. Argentina has continued to struggle with inflation, with the inflation rate in Argentina in 2020 estimated to exceed 40 percent. Reliable figures for the years 2014 through 2016 are not available. The high inflation and fear of another economic depression have opened up a large black market for foreign currency, especially in the metropolis of Buenos Aires.

Since 2009, gross domestic product in Argentina has fluctuated significantly. In addition, it is estimated that GDP per capita in Argentina has been similarly volatile. In the subsequent years, Argentina was able to strengthen its economy somewhat since the depression ended in 2002, which was aided by a consistent positive trade balance until 2014. In 2009, the country reported a record-high 16.9 billion U.S. dollars trade surplus. Surprising given the currency crisis, Argentina had a trade deficit in 2017 and 2018, suggesting economic headwinds. Still, some signs point to an economic upswing, but dark clouds are also gathering. National debt in relation to gross domestic product and the country's budget deficit are likely to increase for most of the foreseeable future.

In the following 4 chapters, you will quickly find the 42 most important statistics relating to "Argentina".

The most important key figures provide you with a compact summary of the topic of "Argentina" and take you straight to the corresponding statistics. 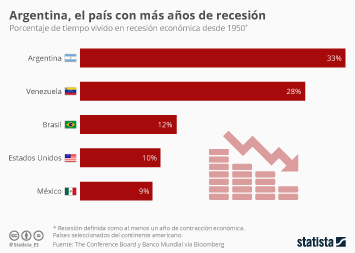 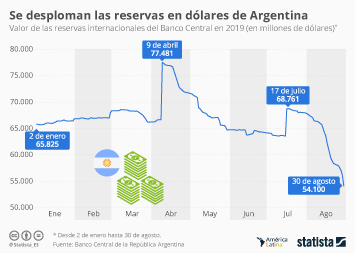