China is currently struggling with the fallout from Typhoon In-Fa, which hit Zhejiang province on early Sunday, causing the closure of two Shanghai airports and the evacuation of almost one million people.

With 3,800 houses reported as collapsed and thousands stranded in the region, the human cost of typhoons is high. But there is also an economic cost that lingers long after the typhoon season is over and that is connected to the many citizens and businesses repairing or rebuilding structures damaged in the weather events – with collective costs often in the billions of dollars.

On the Pacific coast, this cost was the highest after 2019 typhoon Hagibis, which hit Japan, Russia and Alaska in October of 2019 and caused the the death of almost 100 people. Insurer Munich Re estimates the total monetary losses for the event at $17 billion. Since 1980, Typhoon Jebi (September 2018), Typhoon Haiyan (November 2013) and Typhoon Mireille (September 1991) have also caused losses of US$10 billion or more. While Haiyan hit the Phillipines, China, Taiwan and Vietnam, Jebi and Mireille wreaked havoc on Japan. As visible in the data, the insurance levels for storms hitting Japan are significantly higher than those of storms hitting the Philippines or China (Typhoons Lekima, Fitow).

The latest typhoon to affect China, In-Fa, occurred shortly after devastating flooding in central parts of the country which killed at least 58 people. In the ranking of the eight costliest typhoons, four occurred since 2018, in line with scientists' predictions of natural disasters becoming stronger and more frequent because of climate change. The most devastating year was 2019, when Typhoons Hagibis, Faxai and Lekima caused combined damages of more than $34 billion in Asia. 2020 was more subdued when it comes to Pacific storms. Cyclone Amphan, however, caused major damages of $14 billion in India, Sri Lanka, Bangladesh and Thailand that year. In the case of South Asian countries, insurance levels are even lower than in Southeast Asia and China, according to Munich Re. 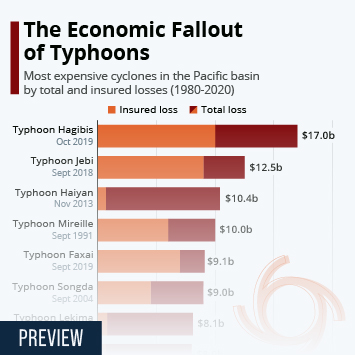 This chart shows the most expensive typhoons since 1980 in the Pacific basin by insured and overall losses.