When things turn sour for the U.S. economy, the country’s trade deficit, i.e. the difference between exports and imports, usually narrows. As consumer spending goes down during economic downturns, so do imports of goods directly or indirectly targeted at consumers, and as Americans tend to travel less during recessions, service imports (which is how tourist spending abroad is accounted for) also tend to fall. At the same time, loose monetary policy tends to result in a relatively weak dollar, in turn boosting exports and attracting foreign tourists.

As the following chart illustrates, things are different this time around. Despite the COVID-19 pandemic having brought on the deepest recession on record along with an unprecedented jobs crisis, the current downturn did not result in the usual narrowing of the U.S. trade deficit. Quite the opposite in fact. Between February, the official beginning of the recession, and October, the trade deficit widened by more than 70 percent.

There are several possible explanations for this unusual trend, with the most obvious being the extensive stimulus package that bolstered consumer spending, hence imports, during the crisis. Another hypothesis is a shift of consumer spending from domestic services, i.e. restaurants, bars, movie theaters, which were all closed, to goods during lockdown, resulting in a larger share of imports in total consumer spending. 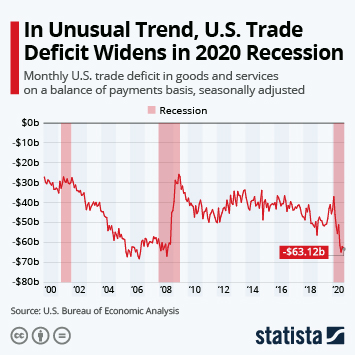