Racism toward Asian Americans has been on the rise ever since the COVID-19 virus originated in China and made it’s way to the U.S. Now, polling shows American’s opinion of China is darkening quickly.

In a new survey from Pew Research Center, 66 percent of U.S. adults hold an unfavorable view of China. That’s up 30 points since 2010 and has been rising sharply since 2017. Favorable opinions of China make up just 26 percent.

The survey went on to show that a vast majority of Americans are increasingly viewing China as a major threat to the U.S. According to Pew, around nine-in-ten Americans view China as a threat, while an enormous 62 percent view China as a major threat. A majority of the concerns surround China’s global impact on the environment, while other concerns center around cyberattacks from the country, the trade deficit with the U.S., the loss of jobs, and China’s track record on human rights.

Ultimately, Americans are feeling more and more threatened by China for reasons that don’t have to do with COVID-19. The virus, however, could be serving as a catalyst for many of these grievances to be addressed more openly and publicly – especially by U.S. government leaders and politicians. 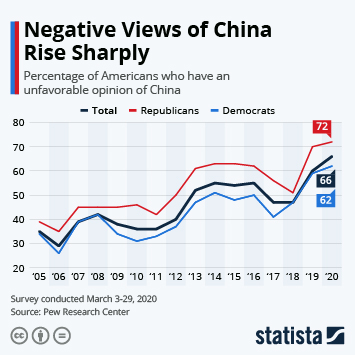 This chart shows the percentage of Americans who have an unfavorable opinion of China.