Surprisingly, there are still some countries out there that have not reported a single case of Covid-19. The two most dubious candidates are certainly Turkmenistan and North Korea, authoritarian states that still deny the pandemic has spread within their borders. Observers do dispute that, however, stating that its almost certain both countries have experienced cases of Covid-19. In Turkmenistan, there have been reports of people experiencing suspected coronavirus symptoms and dying while the government has remained silent. In North Korea, there was a suspected case in the border city of Kaesong which prompted Kim Jong-un to impose a three-week lockdown on the region. It was lifted while state media never commented on the outcome.

Back in April, a lack of public appearances by Kim Jong-un led to rumours that some form of crisis, possibly Covid-19, had indeed gripped the country. He later reappeared at the opening of a fertilizer factory, alive and well, after a 20 day absence. While experts dispute North Korea's claim that it has had no cases, it is entirely possible that its isolation from the rest of the world is now working in its favour. The country was also one of the first to close its borders in response to the threat and that early action may have proven effective in containing the spread of the disease. Excluding the censorship and secretive nature of the regimes in North Korea and Turkmenistan, eight other countries have reliably reported no cases of Covid-19.

They are all island nations located in the South Pacific: Palau, Micronesia, Kiribati, Tuvalu, Samoa and Tonga. Again, this is a case where isolation is the best defense against the pandemic, though the countries are still reeling from the virus despite the lack of physical cases. Tourism is hugely important in the region and hotels and beaches are lying empty. With Vanuatu reporting its first case of Covid-19, along with cases in Fiji and the Solomon Islands, the global pandemic is inching ever closer to the few countries that have escaped its wrath so far. 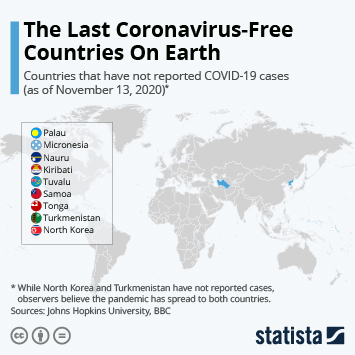 This chart shows countries that have not reported COVID-19 cases.