As the United States sees deaths from the COVID-19 disease surpass 2,000, an analysis shows over 11 million people in the country are at a severe, elevated risk of dying from the virus.

In an analysis from Gallup, an estimated 11,142,765 people in the U.S. are at severe risk of dying from the COVID-19 disease. While the analysis doesn’t predict who is more at risk of contracting the virus, it does predict the chance of someone becoming critically ill or dying if they were to become infected by COVID-19. The analysis accounts for age along with a list of pre-existing health conditions and other mortality factors, such as diabetes, heart disease, cancer or smoking. The percentage of U.S. adults at severe risk of death from the virus increases with age, with the analysis showing nearly 17 percent of adults 80 or older are at severe risk.

Another analysis by Gallup highlighted which U.S. states contained the most people with at least one COVID-19 risk factor. West Virginia made the top of the list, along with several other Southeastern states like Kentucky, Tennessee, South Carolina, Mississippi and Florida. Maine, which has the highest percentage of older Americans relative to total population in the U.S, was also high on the list.

Ultimately, age is still the key factor in determining the risk of someone becoming critically ill or dying after contracting COVID-19. However, other chronic conditions play important roles, and some countries (like the U.S.) are seeing much higher percentages of young people requiring hospitalization. 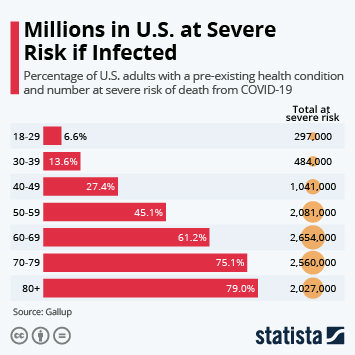 This chart shows the percentage of U.S. adults with a pre-existing health condition and number at severe risk of death from COVID-19.