Americans are bitterly divided over when the country should lift restrictions placed on businesses and citizens due to the coronavirus outbreak.

Over the weekend, protests against COVID-19 restrictions – the best-known of them taking place at the Ohio state house – intensified and spread to many other states. Even though protesters are few, they have been getting media attention, not least because U.S. President Donald Trump has been voicing sympathies for the protesters, tweeting, among other things – “Liberate Minnesota”, “Liberate Michigan” and “Liberate Virginia” over the weekend.

Among the three states mentioned by Trump, just one – Minnesota – is found on a list compiled by USA Today showing which states have already lifted or will lift restrictions on May 1 or even earlier.

Minnesota has reopened outdoor recreation businesses, which in the state comprise a larger variety than in New York, Connecticut and New Jersey, where only marinas and golf courses reopened over the weekend (with some additional requirements in place).

Ohio, North Dakota, Idaho, Colorado and Tennessee are expected to go a step further and allow non-essential businesses to gradually reopen starting May 1. Georgia is even planning to take these steps starting on Friday. While North Dakota and Idaho are among the least affected states in the U.S., others are not.

Texas, South Carolina, Pennsylvania and Vermont have made some very small adjustments to business opening restrictions. Texas has also reopened state parks. In the true style of the state, Vermont will reopen farmers markets next.

It is to be seen how indoor and outdoor reopenings are going amid the ongoing attempt to limit big groups of people gathering. On Friday, pictures of people swarming the small number of reopened Florida beaches during their limited opening hours drew negative headlines. 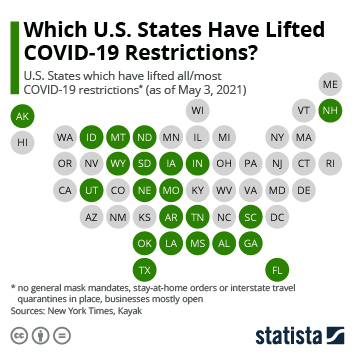 This chart shows U.S. states which have rolled/are planning to roll back COVID-19 restrictions.